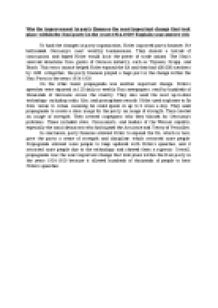 Was the improvement in party finances the most important change that took place within the n**i party in the years 1924-1929? (16 marks)

Transfer-Encoding: chunked ﻿Was the improvement in party finances the most important change that took place within the n**i party in the years 1924-1929? Explain your answer (16) To fund the changes in party organisation, Hitler improved party finances. He befriended Germany?s most wealthy businessmen. They shared a hatred of communism and hoped Hitler would limit the power of trade unions. ...read more.

Hitler?s speeches were reported in 120 daily or weekly n**i newspapers, read by hundreds of thousands of Germans across the country. They also used the most up-to-date technology, including radio, film, and gramophone records. Hitler used airplanes to fly from venue to venue, meaning he could speak in up to 5 cities a day. ...read more.

In conclusion, party finances allowed Hitler to expand the SA, which in turn, gave the party a sense of strength and discipline, which attracted more people. Propaganda allowed more people to keep updated with Hitler?s speeches, and it attracted more people due to the technology, and showed them a superior. Overall, propaganda was the most important change that took place within the n**i party in the years 1924-1929 because it allowed hundreds of thousands of people to hear Hitler?s speeches. ...read more.