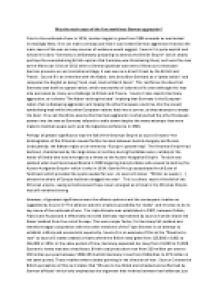 Was the main cause of German aggression in the First World War?

Transfer-Encoding: chunked ﻿Was the main cause of the first world war German aggression? Prior to the outbreak of war in 1914, tension began to grow from 1904 onwards as war looked increasingly likely. One can make a strong case that it was indeed German aggression that was the main cause of the war as many sources of evidence would suggest. Source C is quite explicit and echoes this idea: ?Germany is deliberately preparing to destroy the British Empire? which clearly portrays the overwhelming British opinion that Germany was threatening them; such was the case as the Moroccan Crisis of 1911 when a German gunboat was sent to Morocco to showcase German presence on an international stage, it was seen as a direct threat by the British and French. Source B is an interview with the Kaiser, who describes Germany as a ?great nation? and compares the English as being ?mad, mad, mad as March hares?. ...read more.

Perhaps of greater significance was the fall of the Ottoman Empire as source D states ?the disintegration of the Ottoman caused further tension between Austria-Hungary and Russia. Undoubtedly, the Balkan region once termed as ?Europe?s powder keg?. The Ottoman Empire had declined, characterised by the large losses in territory during the Balkan wars, notably at the hands of Serbia who now emerged as a threat to the Austro-Hungarian Empire. Tension was sparked when Austria annexed Bosnia in 1908 angering many Serbians who vowed to destroy the Austro-Hungarian Empire- which is why in 1914, Gavrilo Princip assassinated Arch Duke of Ferdinand which provided the spark needed for war . As source D states: ?Within six weeks [?] almost the whole of Europe had been dragged into war?. This is a direct result of the fall of the Ottoman empire, seeing as Serbia would have never emerged as a threat is the Ottoman Empire had still remained strong. ...read more.

Economic rivalry was also a key factor, British coal production rose from 229 million per year to 292 million per year between 1900-1913 whilst Germany?s rose from 150million to 279 million in the same period. These rivalries where clearly pointing in the direction of war. Source C shows the British perception of this; as it states that ?We are to be drilled and schooled and uniformed by German officials? which only emphasises the argument that rivalries between both alliances just edged each country closer to war. It was because of this that I believe that this was the major cause of the outbreak of war. In conclusion, although one should note that German aggression was a contributing factor in the outbreak of war, personally I think the alliance systems were the root cause, from which other issues stemmed. Had it not been for the alliance systems and resulting rivalries all countries would have been ill-prepared for war, and perhaps more willing to seek peace as source D clearly shows. ...read more.