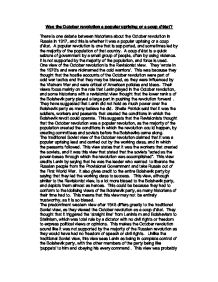 Was the October revolution a popular uprising or a coup d(TM)tat?

This could be because they had to conform to the idolising views of the Bolshevik party, as many historians of their time had to. This means that this view may not be entirely trustworthy, as it is so biased. The predominant western view after 1945 differs greatly to the traditional Soviet view, as they viewed the October revolution as a coup d'�tat. They thought that it triggered the 'straight line' from Leninism and Bolshevism to Stalinism, which was total rule by a dictator with no civil rights or freedom to express political views or opinions. This makes the October revolution sound like it was not supported by the majority of the Russian revolution as they would have had no freedom of speech or civil rights. Unlike the traditional Soviet view, this view sees Lenin as being in complete control of the Bolshevik party, with the other members of the party being like 'puppets' to him and obeying his every command. ...read more.

There were definitely key figures in leading the October revolution, such as Lenin. Lenin's perseverance and ability to motivate people through his public speaking meant that the popularity of the Bolsheviks grew throughout Russia. Lenin became a recognised face with the working class and the support gained from the majority of the population due to this (from peasants, workers, soldiers and sailors). This can contribute to the argument that the October revolution was a popular uprising, as they had so much support from the Russian people. There was also an increase in radicalism throughout the population of Russia. People were beginning to want more radical things from the government, and the Bolsheviks were able to feed this new need for radicalism. This also shows that the October revolution could have been a popular uprising, as they were winning peoples support through their actions and policies. "Peace bread and land" was one of the slogans that brought popularity to the Bolsheviks, and promising land to the peasants was a radical idea (as it meant taking land off the landowners). ...read more.