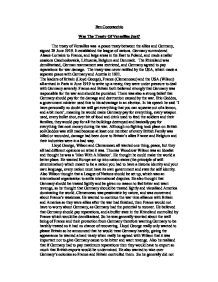 Was The Treaty Of Versailles Just?

Ben Cocoracchio Was The Treaty Of Versailles Just? The treaty of Versailles was a peace treaty between the allies and Germany, signed 28 June 1919. It established the league of nations. Germany surrendered Alsace-Lorraine to France, and large areas in the East to Poland, and made smaller cessions Czechoslovakia, Lithuania, Belgium and Denmark. The Rhineland was demilitarised, German rearmament was restricted, and Germany agreed to pay reparations for war damage. The treaty was never ratified by the USA, which made a separate peace with Germany and Austria in 1921. The leaders of Britain (Lloyd George), France (Clemenceau) and the USA (Wilson) all arrived in Paris in June 1919 to write up a treaty, they were under pressure to deal with Germany severely. France and Britain both believed strongly that Germany was responsible for the war and should be punished. There was also a strong belief that Germany should pay for the damage and destruction caused by the war. Eric Geddes, a government minister used this to his advantage in an election. In his speech he said 'I have personally no doubt we will get everything that you can squeeze out of a lemon, and a bit more', meaning he would make Germany pay for everything, every weapon used, every bullet shot, ever bit of food ...read more.

No Anschluss with Austria was agreed on by all The Germans did not feel that the treaty was just, they thought that they were unfairly punished. They did not feel that they had started the war and did not think that they had lost either. They did not think that they had lost because they were still in a dangerous position, they only signed a cease-fire because they wanted to negotiate peace. Germany were horrified with disarmament because now they were defenceless from any attack and felt that before signing the treaty they were in a position to still fight. Their army that had now been reduced to 100,000 men was one of their great prides but now it is gone. The loss of territory was a blow to both their economy and pride but what else was annoying was that while their territories were being taken away the British were increasing the Empires. Germany were further insulted as they had not been asked to join the league of nations. They did not feel they solely started the war so why should they pay for all the damage and the people had little food therefore would not be able to eat. ...read more.

with Britain and America, the Rhineland buffer state under French control and military costs under French control, also no total figure was fixed. France therefore generally feared what their future would be like if Germany recovered and due to Clemenceau had no grounds to withstand a German attack in the future. The general American opinion about the treaty was that they didn't really care, but if forced would probably say it was unjust. Wilson thought it was unjust because it treated Germany too harshly, even though he still wanted them to be punished. Wilson had put his faith in the league of Nations to improve Germany's position in the future but America had decided not to join the league because of isolationism. So generally America were to involved in trying to get themselves back to the position they were in, in 1917 to worry about European problems and any treaties connected with them. In my opinion the treaty was just. It dealt with Germany reasonably harshly and gave France a good chance to withstand any German attacks in the near future related to the bitterness from the war, yet gave Germany a chance to recover because of the reductions in the estimated sum of the reparations and satisfied Britain, as they got some of Germany's colonies. ...read more.