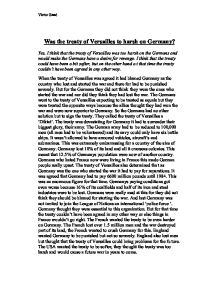 Was the treaty of Versailles too harsh on Germany?

Germany lost 10? of its land and all it overseas colonies. This meant that 12.5? of Germanys population were now of another country. Germans who hated France now were living in France this made German people really upset. The treaty of Versailles also determined that as Germany was the one who started the war it had to pay for reparations. It was agreed that Germany had to pay 6600 million pounds until 1984. This was an enormous figure for that time. Germanys paying conditions got even worse because 16? of its coalfields and half of its iron and steel industries were to be lost. ...read more.

This is a focused and accurate response, with a clear judgement reached. More detail was needed in places and the structure and use of language could have been improved. Overall, a solid response. 4 out of 5 stars.