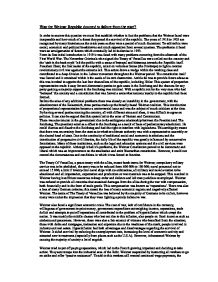 Was the Weimar Republicdoomed to failure from the start?

Was the Weimar Republic doomed to failure from the start? In order to answer this question we must first establish whether in fact the problems that the Weimar faced were insuperable and how much of a threat they posed the survival of the republic. The years of 1918 to 1923 are recognised by many historians as the crisis years as they were a period of much discontent. To add tot his were social, economic and political breakdowns and much opposition from several quarters. The problems it faced were an amalgamation of factors which eventually led to its demise in 1933. From its first initial introduction in 1919 it was faced with many problems occurring from the aftermath of the First World War. The November Criminals who signed the Treaty of Versailles were exiled out the country and the 'stab in the back myth' left the public with a sense of betrayal and bitterness towards the Republic itself. President Ebert, the first leader of the republic, relied on volunteer forces (the Friekorps) to fight a counter revolutionary civil war against the extreme left. This action drove a wedge within the working class and contributed to a deep division in the Labour movement throughout the Weimar period. The constitution itself was flawed and it contained within it the seeds of its own destruction. ...read more.

The KPD believed that Weimar had not gone far enough and were aiming to provoke a socialist revolution, taking inspiration from Bolshevik Russia. The KPD called them the Spartacist League. Karl Liebknecht and Rosa Luxemburg, who wanted a new revolutionary government to replace the existing Weimar one, led the KPD. They aimed to achieve this without violence. On 6th January 1919 radical left wing workers began an uprising in Berlin, known as the Spartacist Rising. Although Liebknecht and Luxemburg felt it was too early for a revolution they felt obliged to offer their support and go along with it. It was down to the leader of the SPD, the party now entirely ruling the country, to put down the rising. He turned to an extreme right wing nationalist group of ex-soldiers know as the Freikorps for helping repressing the uprising. The Freikorps were heavily armed and renound for being violent and particularly nasty. It can be argued that this decision may have affected survival and could have facilitated in the failure of the Weimar Republic. Weimar supposedly had a liberal and democratic government that was slightly leaning towards the left wing, but for some reason turned to the extreme right in this situation. There was three days of savage fighting before the rising was put down. ...read more.

There was also no political alternative to the republic as neither the left of right would have been able to successfully run the country. The right was not strong enough and had no clear line of attack and the left did not have enough support and was still un-recovered from its earlier divisions. In my opinion the problems faced by the Weimar Republic were not impossible as in the end they were successfully overcome. However, there is no doubt that they were very serious and at times posed a very real threat to the survival of the republic. Although there were other significant factors, I feel that the evidence suggests that Stresemann was a fundamental figure in Weimar�s fight for survival. Perhaps it is true that Weimar could have survived without him, but personally I think it would have been more of a case of struggling on until its demise. It can be argued that the Weimar Republic never actually had a real chance of survival from the start. In my opinion it had a particularly unfortunate amount of problems but nevertheless it triumphed in overcoming them. It was pure bad luck that in 1929 not only was Weimar confronted with more economic adversity but also Stresemann died at this crucial time. The Nazis were in the right place at the right time in order to exploit this misfortune. If it had not been for these fateful circumstances, I believe that the Weimar Republic would have survived longer. ...read more.