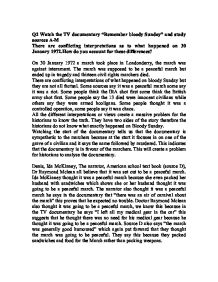 Q2 Watch the TV documentary "Remember b****y Sunday" and study sources A-M There are conflicting interpretations as to what happened on 30 January 1972.How do you account for these differences? On 30 January 1972 a march took place in Londonderry, the march was against internment. The march was supposed to be a peaceful march but ended up in tragedy and thirteen civil rights marchers died. There are conflicting interpretations of what happened on b****y Sunday but they are not all factual. Some sources say it was a peaceful march some say it was a riot. Some people think the IRA shot first some think the British army shot first. Some people say the 13 died were innocent civilians while others say they were armed hooligans. Some people thought it was a controlled operation, some people say it was chaos. All the different interpretations or views create a massive problem for the historians to know the truth. They have two sides of the story therefore the historians do not know what exactly happened on b****y Sunday. Watching the start of the documentary tells us that the documentary is sympathetic to the marchers because at the start it focuses in on one of the grave of a civilian and it says the name followed by murdered. This indicates that the documentary is in favour of the marchers. This will create a problem for historians to analyse the documentary. Denis, Ida McKinney, The narrator, American school text book (source D), Dr Raymond Mclean all believe that it was set out to be a peaceful march. ...read more.

This is significant because this source may be sympathetic to the marchers. The Widgery Tribunal concluded the marchers were shooting at the troops. This decision was made by ignoring the forensics and eyewitnesses. Lord Widgery favoured the army and that is why he came to this conclusion. Dereck Wilford says "the shot came first form the IRA then the army" this tells us that he thought and saw the marchers shooting first. He says this because he is part of the army therefore is backing them up. He was a very rude person, he was very ignorant at times in the documentary. This might suggest why he thought the marchers shot first. The platoon sergeant another person of the army also thought the marchers shot first. He says "the firing I heard was coming from the flats" he says this because he interprets the sound of guns to be guns from the IRA whereas they might have been from his own side. He comes out as an impolite person. There are so many different interpretations of what happened on b****y Sunday I think this is because of people being on different sides either the armies or the marchers. Father Denis Bradley says "the British army shot indiscriminately and everywhere around them without any provocation". He says this on b****y Sunday in source G, this tells us that the 13 that were shot at indiscriminately and without warning, he says this because saw it. "I saw no one shooting at the troops". ...read more.

I personally think they were backing each other up. Dereck Wilford says, "It was a controlled operation in a relatively small area" He says this because he doesn't want people to think that the situation was chaotic and that he couldn't handle it. He also says this because his fellow colleagues say the same, therefore he is biased. The Platoon sergeant says, "The operation charged from a normal are to a scoop up operation" This shows that he thinks they were in control. He says this because he is an army official and therefore he backs his friends up. He seems to be lying. You can tell this by his body language and attitude in my opinion. The Adjutant also says it was a controlled operation. This shows that all the army people except the company Sergeant Major says it was a controlled operation. He says this because he is backing up what his colleagues said. There are so many different interpretations; it is very hard to tell what really happened on that day. The historians are forced with big problems because they are left with two sides of the story and therefore do not know who to believe. It is a mixture between fact and opinion; therefore, it is hard to really find out the truth. There are people who favour different sides. Another problem is that the documentary favours the marchers this is demonstrated at the start when the camera focuses in on the murdered written on the gravestone. At the end, the historians are forced with two sides of the story, one favouring the army and the other favouring the marchers. They do not know the truth even after studying them both. ...read more.