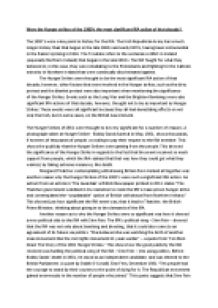 Were the 1980 Hunger Strikes the most significant IRA event of that decade?

﻿Were the Hunger strikes of the 1980?s the most significant IRA action of that decade? The 1980?s were a key point in history for the IRA. The Irish Republican Army has a much longer history than that begun in the late 1960s and early 1970s, having been instrumental in the Easter Uprising in 1916. The Troubles refers to the sectarian conflict in Ireland (especially Northern Ireland) that began in the late 1960s. The IRA fought for what they believed in; in this case, they were retaliating to the Protestants and fighting for the Catholic minority in Northern Ireland that were continually discriminated against. The Hunger Strikes were thought to be the most significant IRA action of that decade; however, other factors that were involved in the Hunger strikes, such as the dirty protest and the blanket protest were also important when mentioning the significance of the Hunger Strikes. Events such as the Long War and the Brighton Bombings were also significant IRA actions of that decade, however, thought not to be as important as Hunger Strikes. These events were all significant because they all had devastating effects on not only the Irish, but in some cases, on the British Government. ...read more.

The Long War can be seen as being significant because it showed everyone that the IRA was serious about their cause. However, the source goes on to say that the IRA issued its second apology in 5 years because of the incident. This event in itself was very significant because it could be said that the IRA saw the bad publicity it was getting from this event, that they blamed the bomb detonation on an ?accidental detonation, meant for its preferred targets, the British army and the Royal Ulster Constabulary.? The IRA receiving international support also made this event very significant. An extract from the daily telegraph in 2011, talks about the Libyan help the IRA received. ?The Villa shipment was to transform the IRA?s ability to wage war against the British state.? This shows that the IRA?s contacts were growing, therefore, with the more help they received, the more dangerous they could become. The quote also shows how the IRA was growing as a paramilitary group; in regards to the fact they thought that they were becoming strong enough to change the British involvement with Ireland. ...read more.

The Judge responsible for sentencing the planter of the bomb stated ?You intended to wipe out a large part of the government and you nearly did.? So it was clear that IRA had its clear intentions and wanted Thatcher dead. I think that how close Margaret Thatcher came to death certainly dropped her confidence levels, especially with the IRA saying ?We only have to get lucky once, you have to be lucky always.? This certainly made Thatcher worry, which could have been the reason for the final point ? seeing Thatcher follow through with her peace treaties. The final reason why the Brighton Bombings were so significant was that it saw Thatcher follow through with her peace treaties. By Thatcher getting up to give a speech the next morning shows how she wanted to resolve things. A BBC News clip on the Brighton Bombings quotes Thatcher ?Life must go on as usual.? This shows us that she wanted to turn away from the IRA. 1985 saw the Anglo-Irish agreement. This was the start of the peace process. The fact that Thatcher actually took action and followed through with her peace treaties was very significant indeed. ...read more.