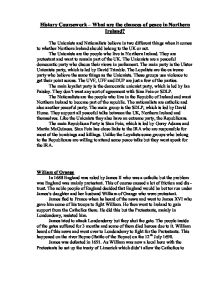 What are the chances of peace in Northern Ireland?

History Coursework - What are the chances of peace in Northern Ireland? The Unionists and Nationalists believe in two different things when it comes to whether Northern Ireland should belong to the UK or not. The Unionists are the people who live in Northern Ireland. They are protestant and want to remain part of the UK. The Unionists are a peaceful democratic party who discus their views in parliament. The main party is the Ulster Unionists party, which is led by David Trimble. The Loyalists are the extreme party who believe the same things as the Unionists. These groups use violence to get their point across. The UVF, UFF and DUP are just a few of the parties. The main loyalist party is the democratic unionist party, which is led by Ian Paisley. They don't want any sort of agreement with Sinn Fein or SDLP. The Nationalists are the people who live in the Republic of Ireland and want Northern Ireland to become part of the republic. The nationalists are catholic and also another peaceful party. The main group is the SDLP, which is led by David Hume. They support all peaceful talks between the UK, Northern Ireland and themselves. Like the Unionists they also have an extreme party, the Republicans. ...read more.

It caused more hatred towards the British army, as they believed the people who were shot were innocent. It also made the Nationalists more determined. b****y Sunday is one of the most talked about events, which happened in Ireland. Every year on the 30th of January they have a remembrance day. b****y Sunday is still talked about due to the fact that people still don't know who fired the 1st shot. People at the present moment suspect the MP Martin McGinnis who was formally part of the IRA. If this is true it will seriously damage any future peace talks. Different Nationalists/Republican groups see b****y Sunday in different ways. The SDLP group (who are peaceful) considers b****y Sunday as an obstacle in their talks for peace. However the IRA wouldn't take up this view. They consider b****y Sunday as a tool to use against their fight against the UK and their army. Due to the fact that b****y Sunday only happened 29 years ago its still remembered by people unlike say the Easter Rising. It stayed in people's minds, as those who experienced it are still alive today so can tell their story or view on what they saw and heard. ...read more.

"I would fight to the death to prevent a united Ireland". He still feels like this today and hopes one day the Protestants will win. This is also the view of other parties such as Sinn Fein although recently they have been willing to take part in peace talks. The Good Friday agreement also involved people from other counties such as America. Senator George Mitchell was the main American involved. He spoke about how the even was carried out. "I had not personally seen a finer example of leadership in a democratic society than that exhibited by Tony Blair and Bertie Aherne in these talks" and "There would not have been an agreement without them. They were superb." The overall feeling in both Ireland and Northern Ireland are that they want peace and need it. Talks are continuing but the riots are still happening. Just the other day on the news it told Britain of an attack with a pipe b**b on a catholic home. Gordon Wilson in 1995 made an amazing point which a lot of people took notice of. "1690 was over 3 centuries ago: we are heading for the 21st century. Time has moved on. I appeal above all to politicians to stop playing politics with peoples lives, to look over their shoulder and listen to what their grassroots supporters are saying" By Lizzy Bowles ...read more.