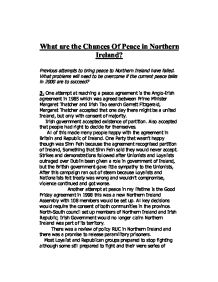 What Are the Chances of Peace In Northern Ireland?

What are the Chances Of Peace in Northern Ireland? Previous attempts to bring peace to Northern Ireland have failed. What problems will need to be overcome if the current peace talks in 2000 are to succeed? 3. One attempt at reaching a peace agreement is the Anglo-Irish agreement in 1985 which was agreed between Prime Minister Margaret Thatcher and Irish Tao search Garrett Fitzgerald, Margaret Thatcher accepted that one day there might be a united Ireland, but only with consent of majority. Irish government accepted existence of partition. Also accepted that people had right to decide for themselves. All of this made many people happy with the agreement in Britain and Republic of Ireland. One Party that wasn't happy though was Sinn Fein because the agreement recognised partition of Ireland, Something that Sinn Fein said they would never accept. ...read more.

All key decisions would require the consent of both communities in the province. North-South council set up members of Northern Ireland and Irish Republic; Irish Government would no longer claim Northern Ireland was part of its territory. There was a review of policy RUC in Northern Ireland and there was a promise to release paramilitary prisoners. Most Loyalist and Republican groups prepared to stop fighting although some still prepared to fight and their were series of shootings in February and March 1998 and people of Ireland voted on whether to accept Good Friday agreement. Irish Republic - 94% voted to accept the agreement, while only 71% of Northern Ireland voted to accept it, this obviously meant that the Republic felt the agreement was better for them. ...read more.

All of these breakthroughs though obviously come with problems and obstacles all still exist as well like the Decommissioning of arms, which the IRA are refusing to do until the Unionists will compromise, which the unionists will only compromise after the IRA hand over their arms. Very Recently actually David Trimble quit the Ulster Union Party because the IRA wouldn't decommission, David Trimble threatened and threatened to quit and the IRA still refused to decommission so he quit. The IRA mainly wouldn't their arms due to the fact that if they decommission their weapons then they would be vulnerable to the UUF, UVF and the British Army. So overall lot's of problems need to be overcome, as I have outlined in this question and if they're not overcome then their will never be peace in Ireland. ...read more.