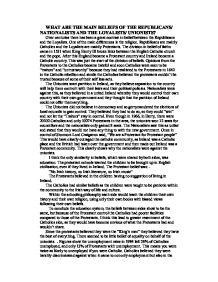 What Are the Main Beliefs of the Republicans/ Nationalists and the Loyalists/ Unionists?

WHAT ARE THE MAIN BELIEFS OF THE REPUBLICANS/ NATIONALISTS AND THE LOYALISTS/ UNIONISTS? Over centuries there has been a great contrast in belief between the Republicans and the Loyalists. One of the main differences is the religion. Republicans are mainly Catholics and the Loyalists are mainly Protestants. The division in belief of faiths came in 1531 when King Henry III broke links between the English Catholic church and the pope. After this England became a Protestant country and Ireland became a Catholic country. This was just the start of the division of beliefs. Opinions from the Protestants to the Catholics became hateful and soon Catholics were seen to be "traitors" and "untrustworthy" because they had retaliated to the Protestants in 1642 in the Catholic rebellion and simile the Catholics believed the protestants couldn't be trusted because of some of their self less acts. ...read more.

catholic community, as Ireland was a Catholic place and the British had taken over the government and then made out Ireland was a Protestant community. This clearly shows why the nationalists were against the unionists. I think the only similarity in beliefs, which were shared by both sides, was education. The protestant schools wanted the children to be brought up in English civilisation, even if they lived in Ireland. The Protestant belief was: - "No Irish history, no Irish literature, no Irish music" The Protestants believed in the children having no suggestion of living in Ireland. The Catholics had similar beliefs as the children were taught to be patriotic within the community to the Irish way of life and culture. Within the schooling philosophy each side would teach the children their own history and their own religion, using only their own books with biased views following their own beliefs. ...read more.

Unionist clearly believed that they should "Give the best to the Protestants" The Republicans wanted to do something about controlling their own country and getting the united Ireland, which they really wanted, but within the party there was disagreement between the IRA and SDLP on how to get the power. To achieve what they wanted the SDLP believed a more peaceful approach compared to the IRA. SDLP believed the settlement should be done through negotiations. The Ira did not support John Hume's (Leader of the SDLP) approach. They believed he was just "part of the British war machine". The IRA's view was more of a violent approach, as they believed, "The only way the Irish people can bring about the freedom is through the use of arms". Overall, until the division, which has been created by history, can be forgotten or both sides are willing to compromise over the difference of beliefs there is going to be no peace. ...read more.