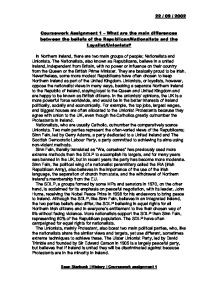 What are the main differences between the beliefs of the Republican/Nationalists and the Loyalist/Unionists?

Coursework Assignment 1 - What are the main differences between the beliefs of the Republican/Nationalists and the Loyalist/Unionists? In Northern Ireland, there are two main groups of people; Nationalists and Unionists. The Nationalists, also known as Republicans, believe in a united Ireland, independent from Britain, with no power or influence on their country from the Queen or the British Prime Minister. They are basically proud to be Irish. Nevertheless, some more modest Republicans have often chosen to keep Northern Ireland as part of the United Kingdom. Unionists, or loyalists, however, oppose the nationalist views in many ways, backing a separate Northern Ireland to the Republic of Ireland, staying loyal to the Queen and United Kingdom and are happy to be known as British citizens. In the unionists' opinions, the UK is a more powerful force worldwide, and would be in the better interests of Ireland politically, socially and economically. For example, the top jobs, largest wages, and biggest houses are often allocated to the Unionist Protestants because they agree with union to the UK, even though the Catholics greatly outnumber the Protestants in Ireland. ...read more.

Although the SDLP, like Sinn Fein, believes in an integrated Ireland, the two parties beliefs also differ, the SDLP believing in equal rights for all Northern Irish citizens and in everyone's entitlement to live their chosen way of life without facing violence. More nationalists support the SDLP than Sinn Fein, representing 60% of the Republican population. The SDLP have often campaigned for equal rights for nationalists. The Unionists, mainly Protestant, also boast two main political parties, who, like the nationalists share the similar views and targets, yet use different, sometimes extreme techniques to achieve these. The Ulster Unionist Party, led by David Trimble and founded by Sir Edward Carson in 1905 is a largely peaceful party, but believes that if Ireland is united they will be discriminated against because Protestants are in the minority in Ireland. The other main party, the Democratic Unionist Party, boasts a more verbally violent leader in Ian Paisley. An extremely Protestant organization, the DUP strongly believes in the upkeep of a strong union between Northern Ireland and the United Kingdom. ...read more.

both use extremely violent methods to pull off their targets. These paramilitaries are responsible for many explosions, and deaths in the United Kingdom and Northern Ireland in recent years. A final group of importance in the Nationalist community is The ancient Order of Hibernians, who arrange parades and social events, and do charity work in the Catholic community. So, to conclude, it is visible that even though organizations like the SDLP and the IRA believe in similar things, and campaign for the same final outcome, they use different methods to achieve these goals, the IRA using great violence, and the SDLP using peaceful negotiation tactics. Finally, the Unionists and Nationalists also differ in many obvious ways. The Unionists are Protestant; believe in union with the UK, and membership in the EU. They are proud, happy British citizens. The Nationalists are Catholic; believe in a united Ireland, and are split in decision to be part of the EU. Although they are technically British citizens, they see themselves as Irish and want the whole of Northern Ireland to see themselves as Irish. 22 / 09 / 2002 Sean Starbuck | History | Coursework assignment 1 ...read more.