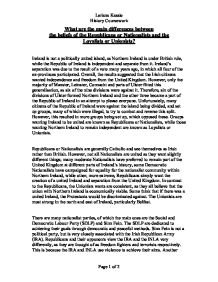 What are the main differences between the beliefs of the Republicans or Nationalists and the Loyalists or Unionists? Ireland is not a politically united island, as Northern Ireland is under British rule, while the Republic of Ireland is independent and separate from it. Ireland's separation was due to the result of a vote many years ago, in which all four of the ex-provinces participated. Overall, the results suggested that the Irish citizens wanted independence and freedom from the United Kingdom. However, only the majority of Manster, Leinster, Connacht and parts of Ulster fitted this generalisation, as six of the nine divisions were against it. Therefore, six of the divisions of Ulster formed Northern Ireland and the other three became a part of the Republic of Ireland in an attempt to please everyone. ...read more.

community within Northern Ireland, while other, more extreme, Republicans simply want the creation of a united Ireland and separation from the United Kingdom. In contrast to the Republicans, the Unionists wants are consistent, as they all believe that the union with Northern Ireland is economically viable. Some think that if there was a united Ireland, the Protestants would be discriminated against. The Unionists are most strong in the north and east of Ireland, particularly Belfast. There are many nationalist parties, of which the main ones are the Social and Democratic Labour Party (SDLP) and Sinn Fein. The SDLP are dedicated to achieving their goals through democratic and peaceful methods. ...read more.

The main paramilitary groups are the Ulster Defence Association and the Ulster Volunteer Force, which has splinter groups such as Ulster Freedom Fighters. These paramilitary groups use violence to achieve their aims. Another important group is the Loyal Orange Order, a Protestant order, best known for its marches in the summer months, but also does charitable and community work. However, some critics say that it has too much influence in Northern Ireland. Unionists and Nationalists want different things for different reasons. Unionists want Northern Ireland to remain a part of the United Kingdom, while Nationalists want power to make Ireland united and independent. Both groups use history as ammunition for their fights against each other and have subdivisions, which use different ways of fighting for their beliefs. ?? ?? ?? ?? Lerisna Kassie History Coursework Page 1 of 2 ...read more.