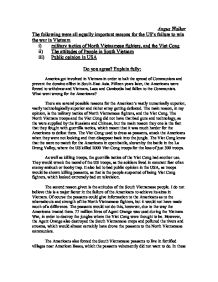 What are the Reasons for the American loss in Vietnam

Angus Walker The following were all equally important reasons for the US's failure to win the war in Vietnam i) military tactics of North Vietnamese fighters, and the Viet Cong ii) The attitudes of People in South Vietnam iii) Public opinion in USA Do you agree? Explain fully: America got involved in Vietnam in order to halt the spread of Communism and prevent the domino effect in South-East Asia. Fifteen years later, the Americans were forced to withdraw and Vietnam, Laos and Cambodia had fallen to the Communists. What went wrong for the Americans? There are several possible reasons for the American's vastly numerically superior, vastly technologically superior and richer army getting defeated. The main reason, in my opinion, is the military tactics of North Vietnamese fighters, and the Viet Cong. The North Vietnam troops and the Viet Cong did not have that bad guns and technology, as the were supplied by the Russians and Chinese, but the main reason they one is the fact that they fought with guerrilla tactics, which meant that it was much harder for the Americans to defeat them. The Viet Cong used to dress as peasants, attack the Americans when they were not looking and then disappear back into the jungle. ...read more.

Pictures were sent home of crying children burned by napalm, and citizens, whose children had been drafted into the army, saw this and gave up support for the American army. As Marshall McLuhan of the Montreal Gazette said: 'Television brought the brutality of war into the comfort of the living room; Vietnam was lost in the living rooms of America - not on the battlefields of Vietnam." Students all over the country started massive protests, the most infamous one being at Kent State University, where National Guardsmen opened fire on the protesting students, killing four people. It looked as if the War in Vietnam was making the country unstable. The American government decided to start withdrawing due to, mainly, the fact of the extremely negative public opinion; as the American President Richard Nixon once said "If, when the chips are down, the world's most powerful nation, the United States of America, acts like a pitiful, helpless giant, the forces of totalitarianism and anarchy will threaten free nations and free institutions throughout the world." This negative public opinion effected the war and the troops because, as many of the American troops were little more than young conscripts, they had been in America seeing this negative support which damaged their morale hugely. ...read more.

It says something for the South Vietnamese peasants' attitude when 40,000 peasants worked to keep the trail open. As the trail went into Cambodia, America had to b**b their territory, which was met by further international condemnation and bad opinions. This act would also have helped the communists take control of Cambodia after the War. This supply issue further changed the morale of the two sides, as the Americans' morale went down due to the unavailability of some equipment, the Viet Cong morale was raised, both due to the almost unlimited supplies and the American failure to stop them. In conclusion I shall say that, although the reasons why the US failed to defeat the North Vietnamese troops and the Viet Cong are all intrinsically linked, the main cause in my opinion is the tactics used by the North Vietnamese. I believe that the three reasons listed above are not all equal, and that the attitude of the South Vietnamese peasants was relatively unimportant. There were many other reasons for the American failure to achieve its aims than those given, but, in my opinion, the main two are the tactics of the North Vietnamese and the public opinion, but also the ineptitude of the young conscripts in the American Army.As Richard Nixon said, "North Vietnam cannot defeat or humiliate the United States. Only Americans can do that." ...read more.