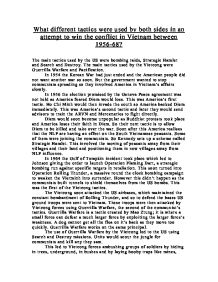 What different tactics were used by both sides in an attempt to win the conflict in Vietnam between 1956-68?

What different tactics were used by both sides in an attempt to win the conflict in Vietnam between 1956-68? The main tactics used by the US were bombing raids, Strategic Hamlet and Search and Destroy. The main tactics used by the Vietcong were Guerrilla Warfare and Pacification. In 1954 the Korean War had just ended and the American people did not want another war so soon. But the government wanted to stop communism spreading so they involved America in Vietnam's affairs slowly. In 1956 the election promised by the Geneva Peace agreement was not held as America feared Diem would lose. This was America's first tactic. Ho Chi Minh would then invade the south so America backed Diem immediately. This was America's second tactic and later they would send advisors to train the ARVN and Mercenaries to fight directly. ...read more.

The Vietcong soon attacked the US airbases, which maintained the constant bombardment of Rolling Thunder, and so to defend the bases US ground troops were sent to Vietnam. These troops were then attacked by Vietcong forces using Guerrilla Warfare, the second of the communist's tactics. Guerrilla Warfare is a tactic created by Mao Ztung; it is where a small force can defeat a much larger force by exploiting the larger force's weakness. A dog cannot get all the flea on it's back as they move too quickly. Guerrilla Warfare works on the same principal. The use of Guerrilla Warfare by the Vietcong led to the US using Search and Destroy missions. Units would scour the jungle for communists and kill any they saw. This led to Vietcong forces ambushing groups of soldiers by hiding in trees, underground, in bushes and by laying booby traps like mines, tripwires and punji stake pits. ...read more.

Strategic Hamlet was a complete failure, it only served to annoy the peasants and make them join the NLF. Also the atrocities committed by US troops turned the peasants against America. However the Pacification used by the Vietcong worked and made the peasants help them. The Tet Offensive was a stupid mistake for the Vietcong, but a military victory for the US. Finally the bombing raids by the US succeeded militarily as they caused massive damage, but politically they hindered the war effort as they killed civilians and the American public saw the images. Most famously Kim. Overall the Vietcong had more successful tactics than the US had, and the US had more failed tactics than the Vietcong had. Also the Vietcong Army had a motive to winning the war, they wanted to unite Vietnam as one country again. Whereas the US army simply wanted to finish their tour of duty and leave. This could be a reason why the US did not win the war. ...read more.