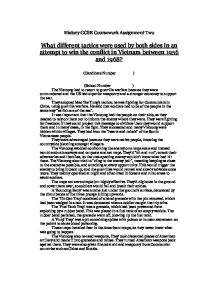 History GCSE Coursework Assignment Two What different tactics were used by both sides in an attempt to win the conflict in Vietnam between 1956 and 1968? (Candidate Number ) (School Number ) The Vietcong had to resort to guerrilla warfare because they were outnumbered and the US had superior weaponry and a stronger economy to support the war. They adopted Mao Tse Tung's tactics; he was fighting for Communism in China, using guerrilla warfare. He said that soldiers had to be of the people in the same way "as fish are of the sea". It was important that the Vietcong had the people on their side, as they needed to rely on them not to inform the enemy where they were. They were fighting for freedom; if they could project this message to civilians then they would support them and in many cases, in the fight. They succeeded and many Vietcong were hidden within villages. They had won the "hearts and minds" of the South Vietnamese people. They were advantaged because they were native people, knowing the countryside blending amongst villagers. The Vietcong avoided confronting the enemy on a large scale and instead would ambush convoys and outposts and set traps. They'd "hit and run"; attack their adversaries and then flee, so the unsuspecting enemy wouldn't know what had hit them. The Vietcong also tried to "cling to the enemy belt", meaning keeping as close to the enemy as possible, and attacking at every opportunity. ...read more.

Kennedy also created Green Berets, which were highly trained special forces. He increased military aid and provided 300 helicopters. Diem's government was corrupt and prejudiced and it was apparent that he was not the man to win the war or unite Vietnam. In 1963, he was assassinated by his own military and there is evidence to suggest the USA knew it was going to happen. By not preventing it, they supported the motion. Also in 1963, Kennedy was assassinated, and the vice president, L B Johnson, came to power. In this period of transition US involvement escalated, and the Quagmire Theory began to take hold. This said that once involved, it became increasingly difficult to withdraw. Johnson realised the severity of the situation and decided bombing was required. He ordered the bombing of the Ho Chi Minh Trail in Laos, hoping that this would prevent infiltration of Vietcong and supplies into South Vietnam. Johnson also thought that they needed to b**b Vietnam but he didn't have public support. He needed a trigger to justify the actions. He in fact, got two. On August 2nd 1954, the US destroyer 'Maddox' and other vessels off the coast were attacked by North Vietnamese torpedo boats. The US base at Pleiku was attacked on February 6-7th. 10 aircraft were destroyed, 8 advisors were killed and over 100 wounded. The US public were outraged, Johnson had justification to b**b North Vietnam and send in ground troops. ...read more.

A pattern of war had now been established. The US troops would wipe out many Vietcong through Search and Destroy and air strikes, so the Vietcong would retreat, sometimes even into Cambodia. Then, when it had cooled off, the Vietcong would reappear, and then the US would attack and it continued in this way. There were no front lines, and no land was lost or gained. The US troops would gauge their success or failure by body counts. There was one conventional battle at Le Drang Valley where the Vietcong lost 1800 soldiers, when the US lost just 240. It proved to the Vietcong that conventional warfare was impossible and they would have to avoid pitched battles. Helicopters were now being used in huge numbers. They were used as troop carriers, often on Search and Destroy. They were also used as transport and as gunships. On the 31st January 1968, the date of the Vietnamese Tet Festival, guerrilla soldiers entered the towns and cities in tanks and there was face-to-face combat between the two sides. The Vietcong suffered huge losses but it was a pivotal turning point of the war. The US government and civilians realised that the Vietcong would never give up, no matter what the losses were. They realised that they were fighting a war which could never really be won, the Vietcong would continue fighting and not surrender and it was apparent that the US should just cut its losses and leave. From this point, US involvement decreased until eventually all troops were removed. ...read more.