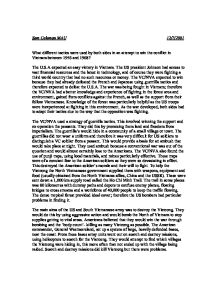 Sam Coleman MAU 12/7/2001 What different tactics were used by both sides in an attempt to win the conflict in Vietnam between 1956 and 1968? The U.S.A expected an easy victory in Vietnam. The US president Johnson had access to vast financial resources and the latest in technology, and of course they were fighting a third world country that had no such resources or money. The VC/NVA expected to win because they had already defeated the French and Japanese using guerrilla tactics and therefore expected to defeat the U.S.A. The war was being fought in Vietnam; therefore the VC/NVA had a better knowledge and experience of fighting in the forest area and environment, gained from conflicts against the French, as well as the support from their fellow Vietnamese. Knowledge of the forest was particularly helpful as the US troops were inexperienced at fighting in this environment. As the war developed, both sides had to adapt their tactics due to the way that the opposition was fighting. The VC/NVA used a strategy of guerrilla tactics. This involved winning the support and co-operation the peasants. They did this by promising them land and freedom from imperialism. The guerrilla's would hide in a community of a small village or town. The guerrillas did not wear a uniform and therefore it was very difficult for US soldiers to distinguish a VC soldier from a peasant. This would provide a basis for an ambush that would take place at night. ...read more.

The Americans avoided bombing major cities of Hanoi and Haiphong as they did not want to do any more damage to their relationship with the USSR. They hoped the bombings would show the North Vietnamese people what power the US had at its disposal. But mass bombing didn't destroy the morale of the North Vietnamese. The US also bombed the Ho Chi Minh Trail. In fact the Americans had dropped a total of 7 million tonnes of bombs - twice that dropped in the Second World War. The Americans used 'hearts and minds' to win over the affection of the Vietnamese people. They did this by providing them with schools and hospitals. This worked as some Vietnamese co-operated closely with the Americans. Others made money from the presence in their country. Most Vietnamese, outside the cities, saw the Americans as their enemy. They saw them kill and destroy, therefore not winning their 'hearts and minds.' The Vietcong response to the US tactics was to dig a network of tunnels. Over 150 miles of tunnels were built under South Vietnam. This provided the Vietcong with shelter from Americans. Here they moved and lived undetected. The Americans believed that the Vietcong were forced to build these tunnels due to the devastation that the Americans had caused. This could have been seen as a slight morale booster for the Americans. But this was a sign of the Vietcong's determination rather than a sign of weakness. ...read more.

The final reason for US failure was the rotation of troops. After one year of fighting American troops were sent home and troops were bought into replace them. This was of a disadvantage to the Americans as troops had little time to adapt to fighting in dense forestry and by the time they were leaving had only just started to have sufficient knowledge of the area. Inexperienced troops also fell victim to booby traps as knowledge of them had yet to be gathered and tell tail signs of them was unknown. With news of the massacre of a war that these new troops were to enter, many of them entered with a low morale and low will to fight. Furthermore, the Vietcong proved to be very resistant and determined enemies. The Vietcong were able to win the support of the peasants. This made the Vietcong able to have the basis to launch an ambush and to hide amongst a community, which made them hard to find. This also contributed to American frustration. The Vietcong also had a higher morale than the US troops. They were confident as they were fighting on home soil and had experience in fighting in the forestry environment against previous opponents like the French. The Vietcong were also extremely determined. This can be proven by the creation of tunnels that were used as shelter from the US airforces. These tunnels were very complex and ran for about 250 kilometres, this proved that the Vietcong were hardworking and extremely determined to resist the American bombardment. ...read more.