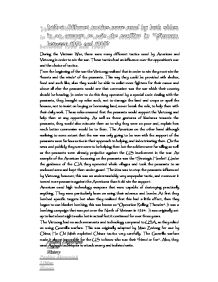 What different tactics were used by both sides in an attempt to win the conflict in Vietnam between 1956 and 1968? During the Vietnam War, there were many different tactics used by American and Vietcong in order to win the war. These tactics had an influence over the opposition's use and the choice of tactics. From the beginning of the war the Vietcong realised that in order to win they must win the "hearts and the minds" of the peasants. This way they could be provided with shelter, food and such like, also they would be able to enlist more fighters for their cause and above all else the peasants would see that communism was the war which their country should be heading. In order to do this they operated by a special code dealing with the peasants, they brought up rules such, not to damage the land and crops or spoil the houses, not to insist on buying or borrowing land, never break the rule, to help them with their daily work. These rules ensured that the peasants would support the Vietcong and help them at any opportunity. As well as these gestures of kindness towards the peasants, they would also educate them as to why they were so poor and, explain how much better communism would be to them. ...read more.

Agent Orange was a chemical defoliant that was used to clear areas of terrain where the Vietcong was suspected to be, but it also caused birth defects among women. Another favourite weapon used by the USA was Napalm. It was a mixture of petroleum jelly with phosphorous that was dropped from fighter - bombers over suspected Vietcong inhabited areas. All that needed was one drop and then it would burn through to the bone and this caused the victims would die of phosphorous poisoning. America would use a combination of troops that were closely supported by planes and helicopters. The planes would be mounted with a gun known as "Puff the magic dragon", a devastating 30mm cannon that could rip up any thing with a "wall of lead". The Vietcong were ill - equipped compared to the Americans but they had an establish route called the "Ho Chi Minh Trail" that was a complex web of jungle tracks which ran from North Vietnam to Saigon carrying about 60 tons of aid per day. In the beginning of the war it took six months for a soldier to navigate his way the trial but as the route became to used more often the experienced soldiers was able to get through in six weeks. The Americans was desperately try to b**b the route but it was invisible from the air so it was impossible to hit with any accuracy. ...read more.

The media portrayal of the war was a major factor, as it is n any modern war. Already horrific stories and pictures are sensationalized, and can influence people almost totally. By 1967 the career soldiers had almost all been used and so the government introduced conscription. This meant that many soldiers were there against their will and wanted only to finish their tour of duty. They started to care less and less about winning the war as they were more occupied with staying alive. Consequently the morale suffered, ragging occurred more often for unpopular commands. The Vietcong on the other hand were highly motivated, they were fighting for a cause they believed in, and were there on their own free will, even women were allowed and willing to fight. As the war went on they became more confident, better armed and trained. This led to the "Tet Offensive". On the January 31st, 1968, more than 70, 000 Vietcong launched an attack on more than a hundred cities and towns. I Saigon they managed to enter the US Embassy building and kill 5 marines, and take over a local radio station. In military terms the Americans won, an estimated 37,000 Vietcong soldiers were killed compared to the 2,500 American troops, but it proved to the soldiers and the American public that the Vietcong had an inexhaustible supply of people and that the Americans would not win the war. Pauline Alagarajah 11Mur History ...read more.