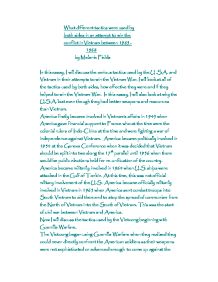 What different tactics were used by both sides in an attempt to win the conflict in Vietnam between 1965-1968?

What different tactics were used by both sides in an attempt to win the conflict in Vietnam between 1965- 1968 by Melanie Fields In this essay, I will discuss the various tactics used by the U.S.A. and Vietnam in their attempts to win the Vietnam War. I will look at all of the tactics used by both sides, how effective they were and if they helped to win the Vietnam War. In this essay, I will also look at why the U.S.A. lost even though they had better weapons and resources than Vietnam. America firstly became involved in Vietnam's affairs in 1945 when America gave financial support to France who at the time were the colonial rulers of Indo-China at the time and were fighting a war of independence against Vietnam. America became politically involved in 1954 at the Geneva Conference when it was decided that Vietnam should be split into two along the 17th parallel until 1956 when there would be public elections held for re-unification of the country. America became militarily involved in 1964 when U.S. ships were attacked in the Gulf of Tonkin. At this time, this was not official military involvement of the U.S. America became officially militarily involved in Vietnam in 1965 when America sent combat troops into South Vietnam to aid them and to stop the spread of communism from the North of Vietnam into the South of Vietnam. ...read more.

These included the Bouncing Betty, which was a b**b with prods, and when it was stood on, it would bounce up and explode. The tin can trap was a b**b inside a can, and when it exploded, it would send shrapnel flying about. The Vietcong also used grenades with trip wires. This surprised and killed the American soldiers as they could not see the trip wire that the Vietnamese used. The Vietnamese often concealed these wires. This tactic was very effective as it terrified U.S. soldiers and sapped the U.S. morale. Altogether, Vietcong tactics were very effective. Now I shall discuss American tactics. The first tactic I shall discuss is financial aid. Before America became militarily involved in the fight against Vietnamese communism, they became financially involved. In 1956 they provided the French (who were then the colonial rulers of Indo-China which included Vietnam) with money to aid them in their fight against the Vietnamese who wanted too claim independence again and were rebelling against their rulers. This was ineffective as the French later lost this war at the battle of Dien Bien Phu and were driven out of Vietnam. The next tactic that I shall discuss is Military Equipment and Advisors. From 1958-1963, America sent increasing amounts of money, military equipment and advisors to aid South Vietnam in their fight against the communist North Vietnam. ...read more.