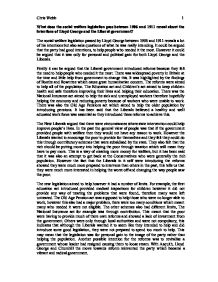 What does the social welfare legislation pass between 1906 and 1911 reveal about the intentions of Lloyd George and the Liberal government?

What does the social welfare legislation pass between 1906 and 1911 reveal about the intentions of Lloyd George and the Liberal government? The social welfare legislation passed by Lloyd George between 1906 and 1911 reveals a lot of his intentions but also asks questions of what he was really intending. It could be argued that the party had good intentions, to help people who needed it the most. However it could be argued that it was only for personal and political gain for both Lloyd George and the Liberals. Firstly it can be argued that the Liberal government introduced reforms because they felt the need to help people who needed it the most. There was widespread poverty in Britain at the time and little help from government to change this. It was highlighted by the findings of Boothe and Rowntree which cause great humanitarian concern. The reforms were aimed to help all of the population. The Education act and Children's act aimed to keep children health and safe therefore improving their lives and helping their education. ...read more.

For example, the first education act introduced provided medical inspections for children however it did not provide any way of treating the problems that were found, therefore many were left untreated. The Old Age Pension act was supposed to help those who were no longer able to work, however this also had a major problem, there were too many conditions which meant many who needed it were not eligible. The other schemes also had different limits, The National Insurance act for example was through contribution. This meant that the poor were having to provide much of there own reforms and showed a lack of investment from the government. Others were only through local authorities and were not compulsory, this indicates that although the Liberals wanted it to seem like they intended to help and did introduce some good legislation, they were not prepared to spend too much to help. This may mean that the legislation was for personal gain to the image of the party rather than helping the population. ...read more.

The Liberals also achieved more gain from the publicity boost that they got from seeming like a party dedicated to welfare. They needed it to survive the increasing support that Labour was getting from the public. From this I can see that the Liberal Government claimed that its intention was to help workers and the poor by providing them with welfare. However it can be argued that the other gains that the Liberals achieved from it were not by accident but rather planned and were ultimately there intentions. The question asks what the intentions of Lloyd George and the Liberal government were; in my opinion the two had different intentions. Many of the proposals were fiercely opposed by some members of the cabinet and Lloyd George and Churchill were the only 'New Liberals'. In my opinion they were the only members who really intended on helping those who needed it. I believe many other Liberals had different intentions and only went along with the reforms because they saw that other advantages could be gained from them. ?? ?? ?? ?? Chris Webb 1 ...read more.

The author has produced a strong essay which shows not only excellent knowledge, through a detailed explanation of the reforms, but also the ability to consider both sides of the argument and reach an informed judgement. 5 out of 5 stars.