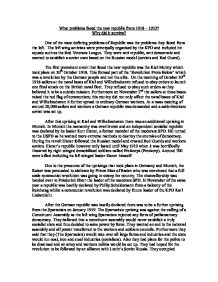 What Problems Faced The Weimar Republic In 1918

What problems faced the new republic from 1918 - 1923? Why did it survive? One of the most defining problems of Republic was the problems they faced from the left. The left wing activists were principally organised by the KPD and included hit squads such as the Red Veterans League. They were anti republic, anti democratic and wanted to establish a soviet state based on the Russian model (soviets and Red Guard). The first prominent event that faced the new republic was the Kiel Mutiny which took place on 30th October 1918. This formed part of the 'Revolution From Below' which was a revolution by the German people and not the elite. On the morning of October 30th 1918 sailors at the naval bases of Kiel and Wilhelmshaven refused to obey orders to launch one final attack on the British naval fleet. They refused to obey such orders as they believed it to be a suicide mission. Furthermore on November 2nd the sailors at these bases raised the red flag of communism; this mutiny did not only affect the naval bases of Kiel and Wilhelmshaven it further spread to ordinary German workers. ...read more.

This was an attempt to seize power and overthrow the republic. In March 1920 orders were issued for the disbandment of the Freikorps its leaders refused and appealed to General Luttwitz for support. He thus responded and called on President Ebert and Defence Minister Noske to stop the programme of troop reductions. When Ebert refused, Luttwitz ordered the Freikorp to march on Berlin and once again the government fled Berlin to Stuttgart. Noske called upon the army to suppress this putsch and they blatantly refused. General Von Seeckt told Noske "Reichswehr does not fire on Reichswehr" As the government fled it asked all of Germany's workers to come out on general strike in order to outnumber the Freikorps. This plea by the government was a massive success and with Germany paralysed the putsch failed. There were 2 main reasons why the Republic survived this putsch this was because of the working classes rallying to its defence and Kapp and Luttwitz only had support of a minority of the extreme right and many thought this putsch was ill timed and refused to join it; hence its failure. ...read more.

The working classes and some of the middle classes favoured stability rather than losing everything they had gained from the democratic route. Extremist groups were the minority in Germany's society and thus were not an overwhelming dominating power. The republic appeared to cope with economic crises and the burdens of reparations until 1929. In the late 1920s Germany had a stable currency, competitive interest rates and increasingly settled place within the international community and thus became a magnet for investment. Next loans were given to local authorities to build more homes for the working classes. In the times of 'good fortune' it was a good time to build on what had not been perfect times for the Weimar republic and thus gain 'friends' for the republic. Furthermore Gustav Stressemann brought about both survival and stability in the economy in the Dawes Plan of 1924 and the Young Plan of 1929. The economic stabilities of the 1920s didn't end their, industrial production of iron and steel exceeded pre war levels. New chemical and industrial industries helped boost the Weimar Republics economy additionally. From 1922 onwards Germany gained back some of its lost status which it had held so dearly before the war. ...read more.