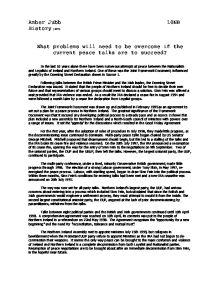 What problems will need to be overcome if the current peace talks are to succeed?

Amber Jubb 10NB History (607) What problems will need to be overcome if the current peace talks are to succeed? In the last 10 years alone there have been numerous attempts at peace between the Nationalists and Loyalists of Ireland and Northern Ireland. One of these was the Joint Framework Document, influenced greatly by the Downing Street Declaration shown in Source 1. Following talks between the British Prime Minister and the Irish leader, the Downing Street Declaration was issued. It stated that the people of Northern Ireland should be free to decide their own future and that representatives of various groups should meet to discuss a solution. ...read more.

For the first year, after the adoption of rules of procedure in July 1996, they made little progress, as the decommissioning issue continued to dominate. Multi-party peace talks began chaired by US Senator George Mitchell. Mitchell proposed that disarmament should begin, but this led to a stalling of the talks and the IRA broke its cease fire and violence resumed. On the 20th July 1997, the IRA announced a resumption of its cease fire, opening the way for the entry of Sinn Fein to the negotiations on 9th September. Two of the unionist parties, the DUP and the UKUP, then left the talks. However, the largest unionist party, the UUP, continued to participate. ...read more.

Talks between eight political parties and the British and Irish governments continued until 10th April 1998. A comprehensive agreement was reached on 10th April, its contents was put to the people of Northern Ireland in a referendum on 22nd May 1998. The Agreement recognises the "opportunity for a new beginning" and the need for "reconciliation, tolerance and mutual trust". The Northern Ireland Assembly met to appoint ministers July 15th 1999, but collapses in bewilderment when the Protestant UUP party refuse to appoint Ministers as the IRA had not begun to de-commission their weapons. It seems the only way peace can be brought to the mass confusion and violence of Ireland and Northern Ireland is a complete decommission from both Loyalist and Nationalist parties. Resumption of peace negotiations are to be brought about after an immediate decommission from Sinn Fein, in the hopeful near future. ...read more.