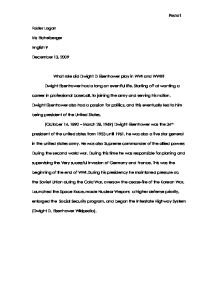 What role did Dwight D Eisenhower play in WWI and WWII?

Foster Logan Ms Eichelberger English 9 December 13, 2009 What role did Dwight D Eisenhower play in WWI and WWII? Dwight Eisenhower had a long an eventful life. Starting off at wanting a career in professional baseball, to joining the army and serving his nation. Dwight Eisenhower also had a passion for politics, and this eventually led to him being president of the United States. (October 14, 1890 - March 28, 1969) Dwight Eisenhower was the 34th president of the united ststes from 1953 until 1961. he was also a five star general in the united states army. He was also Supreme commander of the allied powers During the second world war. ...read more.

He kept this the same when he enrolled at West Point Military Academy. This was the beginning of his Military Career. (Dwight D. Eisenhower Wikipedia). Eisenhower served as executive officer to General Fox Conner from 1922 to 1924.General Fox Conner was a highly respected officer in the Panama Canal Zone. Bieng proven to be an aid to his career, Conner began to be eisenhowers mentor and teacher.conner taught him seminal works of history, military science, and philosophy. It was also Conner that taught Eisenhower the very high possibility of another World War. After this Eisenhower went to the Command and General Staff School at Ft. Leavenworth, Kansas, the army's most elite graduate school. ...read more.

With the support of Republican liberals and internationalists, he defeated Senator Robert A. Taft for the nomination an easy victory was brought to him by promising to end the Korean War. He took office on January 20, 1953. During his first term he fulfilled exactly what he promised America he stopped the war in Korea by threatening to use nuclear weapons. During his second term Desegregation was starting to become one of the main things on the president's agenda. Even though he was unenthusiastic about this, troops were sent to Little Rock, Ark. To make a decision on the desegregation he decided to prohibit Discriminatory practices. ("infoplease.com") This is a small list of achievements and accomplishments that Dwight D Eisenhower accomplished there are still many more things that he accomplished he is still honored by many people today and will never be forgotten. ...read more.