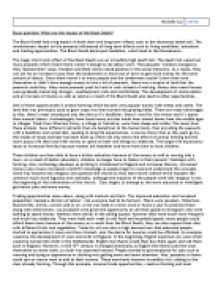 What was the impact of the Black Death?

﻿Michelle Cao 10FZK Essay question: What was the impact of the Black Death? The Black Death had a big impact in both short and long term effects such as the disastrous death toll. The revolutionary impact on the peasants influenced all long term effects such as living conditions, education and trading opportunities. The Black Death destroyed feudalism, which lead to the Renaissance. The tragic short term effect of the Black Death was an incredibly high death toll. The death toll wiped out many peasants which meant there weren?t enough to do labour work. The peasants? mindset changed as they realized their value, freedom and their newly raised position in the social hierarchy. As a result, they can ask for an increase in pay from the landowners or move out of town to get more money for the same amount of labour. Since there weren?t as many people and the landowners couldn?t farm their land themselves or didn?t have enough money to hire a lot of peasants, there was a surplus of land that the peasants could buy. ...read more.

A source shows that as the years go by, the intake of meat and beer has been built up which not only shows the effect of animal farming but the more joyous life they lead with money to spend on beer and things to celebrate. The longer life expectancy leads to increased fertility because women are healthier and have more time to have children. Those children are then able to have a better education because of the money as well as moving into a town. As a result of better education, children no longer have to follow in their parents? footsteps with farming. Also, technology develops as printing is introduced to England and increases literacy. Increased literacy also means increased scientific knowledge as people begin to read and understand the concepts. Some may become less religious and question the church as they learn more science which explains the unknown much more logically and rationally, although the majority of the people were still religious it was the beginning of the reformation of the church. ...read more.

In the beginning, English exported raw wool which would be turned into cloth in the Netherlands; English merchants would then buy them again and sell them back in England. However, in the 15th century it changed drastically as English merchants used the wool themselves to make cloth, so cloth was exported instead. People started to get employed for jobs such as weaving and dying as appearance in clothing was getting more and more attention. Also, peasants at home could spin or weave wool to add to their income. These merchants became incredibly rich, adding to the class already forming. Through this example, income/trade opportunities, creative thinking and local businesses are emphasized. Trading, markets and fairs portray how money has brought in class and developments. These developments are all long term impacts from the Black Death. The Black Death had a horrendous short term impact in terms of the death rate and grief it caused but however, the long term impacts of money, living conditions, education, health and trade developed society immensely. Although the massive amount of deaths that occurred is horrific, the big developments in society were thanks to the Black Death. ...read more.