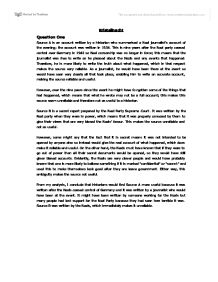 What was the main cause of Kristallnacht?

Kristallnacht Question One Source A is an account written by a historian who summarised a n**i journalist's account of the evening; the account was written in 1954. This is nine years after the n**i party ceased control over Germany in 1945 so n**i censorship was no longer in force; this means that the journalist was free to write as he pleased about the Nazis and any events that happened. Therefore, he is more likely to write the truth about what happened, which in that respect makes the source very reliable. As a journalist, he would have been there at the event so would have seen very clearly all that took place, enabling him to write an accurate account, making the source reliable and useful. However, over the nine years since the event he might have forgotten some of the things that had happened, which means that what he wrote may not be a full account; this makes this source seem unreliable and therefore not as useful to a historian. Source B is a secret report prepared by the n**i Party Supreme Court. It was written by the n**i party when they were in power, which means that it was properly censored by them to give their views that are very biased the Nazis' favour. This makes the source unreliable and not as useful. However, some might say that the fact that it is secret means it was not intended to be opened by anyone else so instead would give the real account of what happened, which does make it reliable and useful. On the other hand, the Nazis must have known that if they were to go out of power then all their secret documents would be opened, so they would have still given biased accounts. Evidently, the Nazis are very clever people and would have probably known that one is more likely to believe something if it is marked "confidential" or "secret" and used this to make themselves look good after they are leave government. ...read more.

This is obviously an incorrect statement because in 1940, he invaded France and succeeded in taking them over. With this knowledge in mind, the reliability of the source is already questionable - if the person quoted, Hitler, lied about this, what else is he not saying? This was reported by Frau Troost, whose husband was one of Hitler's favourite architects. Hitler would have wanted to keep the Troost family on his side for that reason. If he did not, then his buildings would no longer be as he liked them, which Hitler would not want, so it was in his interests to keep him. If Hitler had told Troost it was an organised attack, which he supported, Troost's husband might not have wanted to work with him so much; Hitler could not take that risk. This makes the source more unreliable. Source I does not immediately seem to back up Goering because they blame different people. However, they both show that Hitler was sorry for what happened. Source I says Hitler thought "Kristallnacht was terrible" and H that "Hitler made some apologies for Goebles." Both sources have proven to be unreliable, especially Source I, so the question about trusting either of what these sources say remains. Discounting reliability, Source I backs up Source H nicely. Question Six Source A claims that the events were not caused by the public but by Goebbles. A historian said a n**i journalist, Fritz Hesse "could hear Goebbles explaining about a mass attack which he and the SA were going to launch against the synagogues and Jewish shops". It was also not spontaneous; it was planned. One can tell this because the historian states that Goebbles said it would be launched "in a few hours' time". Therefore, it does not agree with the statement in question. However, over the nine years since the event, Hesse might have forgotten some of the things that happened, which means what he wrote may not have been a full account; this makes the source seem unreliable and therefore not as useful to a historian. ...read more.

have wanted the Troost family to stay on the n**i side because of the architectural skills they can offer the party; thirdly, it was reported 33 years after Kristallnacht so, if the author had not kept a transport, there was plenty of time for things to be forgotten, making the conversation incomplete and and all the less reliable. Source D describes how notices reading "'Jews not wanted' appeared", which were probably put there by the n**i party. This means the n**i party must have been trying to cause some anti-Semitism, tempting an uprising. Perhaps "people" does refer to the German public and maybe Hitler had never intended it to go that far. After all, as Goering points out in Source H, it did disrupt plans for rearmament, which were really important to the Nazis. To conclude Sources B, D and I all either state or imply that the public were the cause. That said, the conclusion for Sources D and I can only be reached by inference. All these three sources have one things in common - they are all unreliable. Six of these sources blame the n**i party or Goebbles. These are sources A, C, E, F, G and H. Four of these are either quite or fully reliable: A, C, E and H. With four reliable sources backing up the idea the public were not to blame and none to say that they were, it is safe to assume that they were not to blame. Of all the sources, only four mention the spontaneity so only these can be used to comment on the final part of the statement in question. All four sources A, C, E and H say that it was planned. Of these, C and H are fully reliable whereas A and E are quite reliable. It is safe to assume that it was not a spontaneous attack. As a consensus, the sources support neither part of the statement: "Kristallnacht was a spontaneous event caused by the German people." ...read more.