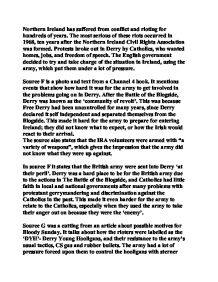 What was the main reason why the British army faced many problems during the battle for peace in Free Derry?

Northern Ireland has suffered from conflict and rioting for hundreds of years. The most serious of these riots occurred in 1968, ten years after the Northern Ireland Civil Rights Association was formed. Protests broke out in Derry by Catholics, who wanted homes, jobs, and freedom of speech. The English government decided to try and take charge of the situation in Ireland, using the army, which put them under a lot of pressure. Source F is a photo and text from a Channel 4 book. It mentions events that show how hard it was for the army to get involved in the problems going on in Derry. ...read more.

The source also states that the IRA volunteers were armed with "a variety of weapons", which gives the impression that the army did not know what they were up against. In source F it states that the British army were sent into Derry 'at their peril'. Derry was a hard place to be for the British army due to the actions in The Battle of the Blogside, and Catholics had little faith in local and national governments after many problems with protestant gerrymandering and discrimination against the Catholics in the past. This made it even harder for the army to relate to the Catholics, especially when they used the army to take their anger out on because they were the 'enemy'. ...read more.

The article ends with a quote from Gen Ford, " The minimum force is necessary to receive a restoration of law and order." Although source G explores some possible motives for b****y Sunday, it does not explain how the killing of thirteen marchers was allowed under 'the minimum force'. In conclusion, there are many reasons as to why the army faced so many problems during the battle for peace in Free Derry, but the most relevant reason in my opinion, is that the army was forced to go to Ireland, not knowing anything of Irish history, and not prepared for the measures of violence in the country at the time. ...read more.