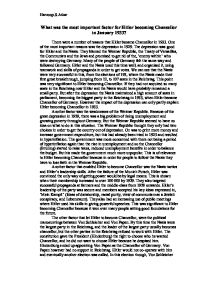 What was the most important factor for Hitler becoming Chancellor in January 1933?

What was the most important factor for Hitler becoming Chancellor in January 1933? There were a number of reasons that Hitler became Chancellor in 1933. One of the most important reasons was the depression in 1929. The depression was good for Hitler and the Nazis. They blamed the Weimar Republic, the Treaty of Versailles, the Communists and the Jews and promised to get rid of the, 'enemy within' who were destroying Germany. Many of the people of Germany felt the same way and followed Germany. Hitler and the Nazis used this time well, and organised it, using teamwork and skills of propaganda in order to get votes. We can see that the Nazis were very successful in this, from the elections of 193, where the Nazis made their first great breakthrough, jumping from 12, to 107 seats in the Reichstag. ...read more.

The government was more concerned with there not being a period of hyperinflation again than the rise in unemployment and so the Chancellor (Bruning) started to raise taxes, reduced unemployment benefits in order to balance the budget. But his made the government much more unpopular. This is of relevance to Hitler becoming Chancellor because in order for people to follow the Nazis they have to lose faith in the Weimar Republic. Another factor that enabled Hitler to become Chancellor was the Nazis tactics and Hitler's leadership skills. After the failure of the Munich Putsch, Hitler was convinced the only way of getting power would be by legal means. This is shown when their membership increased to over 100 000 by 1929. They also targeted successful propaganda at farmers and the middle-class from 1928 onwards. Hitler's leadership of the party was secure and members accepted his key ideas expressed in, 'Mein Kampf.' ...read more.

Hitler would not co-operate with him and eventually another election was called. In this election though, Von Schleicher (Hindenburg's main advisor) stopped supporting Von Papen and decided he should be Chancellor himself. This triggered off a power struggle between the two. Von Papen agrees to work with Hitler. This results in Von Schleicher to resign since he cannot gain enough support in the Reichstag. Hindenburg is then advised to make Hitler Chancellor or he might trigger a Nazi revolt and civil war. Hitler is then appointed Chancellor of Germany. Whilst the depression would appear to be the most important factor for Hitler becoming Chancellor in 1933, no one factor emerges alone, they are all inter-linked. Hitler's leadership skills and the tactics of the Nazis gained support and when the depression began people voted for the Nazis. The depression led to the weaknesses of the Weimar Republic. Hitler's leadership skills, Nazi tactics, the depression and the weaknesses of the Weimar Republic resulted in political manoeuvring between Von Schleicher and Von Papen. Harnoop.S.Atkar ...read more.

This is a superb response, which confidently and accurately explains the reasons for Hitler becoming chancellor. It is very well written and demonstrates understanding of the links between causes in the conclusion. 5 out of 5 stars.