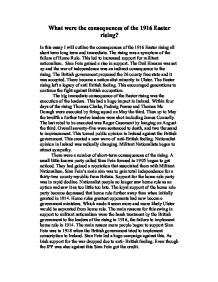 What were the consequences of the 1916 Easter rising?

What were the consequences of the 1916 Easter rising? In this essay I will outline the consequences of the 1916 Easter rising all short term long term and immediate. The rising was a symptom of the failure of Home Rule. This led to increased support for militant nationalism. Sinn Fein gained a rise in support. The Dail Eireann was set up and the war of independence was an indirect consequence to the rising. The British government proposed the 26 county free state and it was accepted. There became a nationalist minority in Ulster. The Easter rising left a legacy of anti British feeling. This encouraged generations to continue the fight against British occupation. The big immediate consequence of the Easter rising was the execution of the leaders. This had a huge impact in Ireland. Within four days of the rising Thomas Clarke, Padraig Pearse and Thomas Mc Donagh were executed by firing squad on May the third. Then up to May the twelfth a further twelve leaders were shot including James Connolly. ...read more.

Which made it seem more and more likely Ulster would be separated from home rule. The main reasons for this swing in support to militant nationalism were the harsh treatment by the British government to the leaders of the rising in 1916, the failure to implement home rule in 1914. The main reason more people began to support Sinn Fein was in 1918 when the British government tried to implement conscription to Ireland. Sinn Fein led a huge campaign against this. As Irish support for the war dropped due to anti- British feeling. Even though the IPP was also against this Sinn Fein got the credit. In the 1918 general election won seventy-three seats to the IPP's seven. Home rule was now dead. The shape of Irish Politics had been transformed for the rest of the century. This then led to Sinn Fein MPs setting up their own illegal government in Dublin the Dail Eireann. Sinn Fein MPs had carried out their election Promises and refused to take up their seat in Westminster. ...read more.

Ulster Unionists reluctantly accepted realising they had to reach a compromise. Nationalists rejected the government of Ireland act. Home Rule was no longer acceptable. However as the war of independence raged on it became apparent Ireland could not defeat Britain and Britain could not cope with guerrilla warfare. Both sides came to a truce in 1921. Michael Collins and Arthur Griffith attended a conference in London to discuss Ireland's future. The British government Proposed a twenty-six county free state. The delegates agreed they felt it was a stepping-stone to independence. They therefore signed the Anglo -Celt treaty in December 1921. When the treaty was brought back to the Dail it caused a bitter split erupting in civil war. There was ongoing bitterness in Irish politics, ongoing support for militant nationalism. The Real IRA continues to live on, nationalist persecution in Ulster and continued anti-British feeling. I have concluded that the Easter Rising was one of the most important episodes in Irish history. The legacy of which continues to live on. The rising made Britain realise that it had to compromise and Ulster Unionists they could not continue to have it their own way. ...read more.

The author deals well with the immediate and short-term consequences of the Easter Rising but is less convincing when discussing longer-term outcomes. Later paragraphs lack detail and the conclusion could have referred to key ideas in the essay more. 4 out of 5 stars.