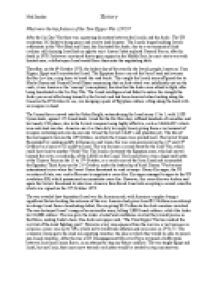 What were the key features of the Yom Kippur War 1973

﻿Ned Jacobs History What were the key features of the Yom Kippur War (1973)? After the Six Day War there was a growing discontent between the Israelis and the Arabs. The UN resolution 242 failed to bring peace and resolve land disputes. The Israelis began building Jewish settlements in the West Bank and Sinai; this frustrated the Arabs, due to a vast amount of Arab civilians still claiming Israel had no right to exist. Anwar Sadat replaced General Nasser, after his death in 1970. Sadat was convinced that to gain support in the Middle East, he must start a war with limited aims, a defeat upon Israel would force them onto the negotiating table. Therefore, on the 6th October 1973, the holiest day of the year for the Jewish people, known as Yom Kippur, Egypt and Syria attacked Israel. ...read more.

Israel for the first few days suffered hundreds of casualties and lost nearly 150 planes; due to the Soviets weapons being highly affective, such as SAGGAR?s which were anti-tank missiles. America saw it as their duty to supply Israel, giving them a vast amount of weapons including anti-missile-missiles to beat the Soviets SAM?s and phantom jets. The tide of the war began to turn on the 10th October, in which the Syrians were pushed back. The Soviet Union Responded by sending airlifts to Damascus and Cairo, this was soon answered on the 12th and 13th October by a massive US airlift to Israel. The war became a second front for the Cold War, which could have lead to another World War. The Israelis destroyed the Egyptian army, who had moved beyond the cover, or umbrella, of the SAMS on the Canal. ...read more.

The war destroyed Israel?s image of an invincible army, killing 2,800 Israeli soldiers, whilst the Arabs lost 16,000 soldiers. The war gave the Arabs a belief and confidence in what they would pursue in the future, making Sadat a hero. One Arab newspaper said, ?The Yom Kippur War has marked the survival of the Arab fighting spirit?. However a key consequence from the war was a vast increase in oil prices; prices rose up to 70%, which led to worldwide inflation and recessions in 1974-75. This economic slump gave the Arab oil-exporting countries the idea in which they would be able to punish pro-Israeli countries. After the war a UN Disengagement Observer Force occupied a buffer zone between Israel and Syrian forces, in an attempt to stop any future conflicts. The war taught Egypt and Israel, but not Syria, that some move towards each other would be needed to stop constant war. ...read more.