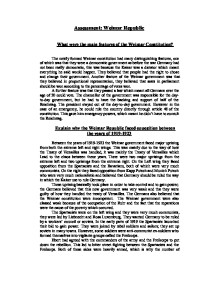 What were the main features of the Weimar Constitution?

Assessment: Weimar Republic What were the main features of the Weimar Constitution? The newly formed Weimar constitution had many distinguishing features, one of which was that they were a democratic government as before the war Germany had not been really democratic, this was because the Kaiser was a dictator which meant everything he said would happen. They believed that people had the right to chose and change their government. Another feature of the Weimar government was that they believed in proportional representation, they believed that seats in parliament should be won according to the percentage of votes won. A further feature was that they passed a law which meant all Germans over the age of 20 could vote. The chancellor of the government was responsible for the day-to-day government, but he had to have the backing and support of half of the Reichstag. The president stayed out of the day-to-day government. However in the case of an emergency, he could rule the country directly through article 48 of the constitution. This gave him emergency powers, which meant he didn't have to consult the Reichstag. Explain why the Weimar Republic faced opposition between the years of 1919-1923 Between the years of 1919-1923 the Weimar government faced major uprising from both the extreme left and right wings. ...read more.

This meant that there was no transport, power or water. After a few days Kapp realised that he wouldn't succeed so he left the country. Kapp was hunted down and he died shortly before his trial. The rest of the rebels were set free by the court and the judges. Kapp's attempt to go back to the ways of the Kaiser, had failed. The Munich Putsch was organised by Adolph Hitler who was an extreme right winger. This attempted rebellion occurred in November 1923, Adolph Hitler led an attempted rebellion in Munich. Hitler received a short prison sentence. It was a major coincidence how the judge was the same judge who had tried him two years earlier for disorder. Both times Hitler got off very lightly; it seemed that the Weimar's right wing opponent had friends in high places. Did the events of 1919-1923 make the Weimar Republic stronger or weaker? Explain your answers In my opinion, I feel that the three major events which occurred in the years between the years of 1919-1923 made the Weimar Government both weaker and stronger in some cases. The three major events which occurred were: French occupation of the Ruhr, hyper inflation and the Munich Putcsh. ...read more.

Hitler got off very lightly and was sentenced to two years imprisonment which was then reduced to nine months; this showed that the Weimar was weak and that they failed to keep Hitler in prison for the full sentence as well as any from any future attempts of gaining power and causing trouble. However, you could argue that the Weimar were a success because they managed to imprison Adolph Hitler. Conclusion In conclusion my opinion of the Weimar constitution is that it weak in some cases and stronger in others. They showed great weakness during the uprisings from the extreme right and left wings. They also showed great weakness when the French occupied the Ruhr, and due to the government not dealing with this case properly hyperinflation was to follow and add to the already economical instability of the country. However, they showed strength when the Germans got together and worked as a unit to put an end to the occupation of the Ruhr. They also showed strength when they got Germany back on their feet after Chancellor Gustav Stresemann helped them out by calling of the passive resistance and borrowed money in order to get the economy going once again. They also showed some strength when they imprisoned Hitler for his attempted rebellion from which he was trying to gain power. ...read more.