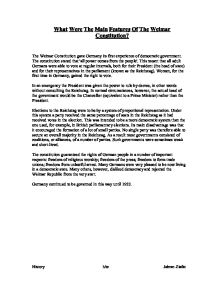 What Were The Main Features Of The Weimar Constitution

rather than the President. Elections to the Reichstag were to be by a system of proportional representation. Under this system a party received the same percentage of seats in the Reichstag as it had received votes in the election. This was intended to be a more democratic system than the one used, for example, in British parliamentary elections. ...read more.

Such governments were sometimes weak and short-lived. The constitution guaranteed the rights of German people in a number of important respects: freedom of religious worship; freedom of the press; freedom to form trade unions; freedom from unlawful arrest. Many Germans were very pleased to be now living in a democratic state. Many others, however, disliked democracy and rejected the Weimar Republic from the very start. Germany continued to be governed in this way until 1933. ?? ?? ?? ?? History h/w Jabran Ziafat ...read more.