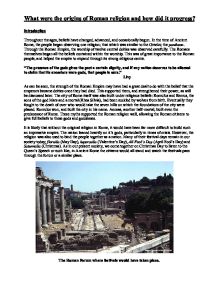 What were the origins of Roman religion and how did it progress?

What were the origins of Roman religion and how did it progress? Introduction Throughout the ages, beliefs have changed, advanced, and occasionally begun. In the time of Ancient Rome, the people began observing one religion; that which was similar to the Greeks; the pantheon. Through the Roman Empire, the worship of twelve central deities was observed carefully. The Romans themselves began all the beliefs contained within the worship. This was of great importance to the Roman people, and helped the empire to expand through its strong religious centre. "The presence of the gods gives the past a certain dignity, and if any nation deserves to be allowed to claim that its ancestors were gods, that people is ours." Livy As can be seen, the strength of the Roman Empire may have had a great deal to do with the belief that the emperors became deities once they had died. This supported them, and strengthened their power, as will be discussed later. The city of Rome itself was also built under religious beliefs: Romulus and Remus, the sons of the god Mars and a mortal (Rhea Silvia), had been suckled by wolves from birth. Eventually they fought to the death of over who would take the seven hills on which the foundations of the city were placed. Romulus won, and built the city in his name. Aeneas, another half-mortal, built even the predecessor of Rome. These myths supported the Roman religion well, allowing the Roman citizens to give full beliefs to these gods and goddesses. It is likely that without the original religion in Rome, it would have been far more difficult to build such an impressive empire. The nation leaned heavily on it's gods, particularly in times of crisis. However, the religion was also used to bind the people together as a nation. Many of their festival days remain in our society today; floralia (May Day), lupercalia (Valentine's Day), All Fool's Day (April Fool's Day) ...read more.

This was the closest thing the citizens had on earth to the gods, and therefore emperors were almost worshipped while still living. The emperors grew to accept this, recognising that divinity would strengthen their power throughout the state. The deification of emperors quickly became the usual thing, causing Vespasian's dying words; "I think I'm turning into a god!" Only a few of Rome's emperors were not deified, such as Caligula and Nero. These few emperors had been officially condemned by the state for their criminal acts, so terrifying and damaging to the empire that they were not considered worthy by any means of worship. Official state religion ended here. The demands for the average Roman citizen were few, and many people chose to worship household gods for their own protection. Vesta was the central figure for this worship, but below her came the Lares and Penates. They were the spirits of the household and store cupboard, and ensured in personal happiness within the home. Within each family there was also a genius or family god, who guarded each family separately. The genius was often represented by a serpent and was worshipped at the family shrine, or lararium in the atrium. The Faith of the Romans Roman religion differed greatly to the Christian religion and many of the religions with which we are accustomed today. As we base our religious beliefs on faith, and a personal relationship with our god/gods, Romans simply went through life aiming to maintain the peace by simply going along with what they were told to do. Religion was almost compulsory, but a part of life which did not really cause a problem or changes in anyone's life. The religion of Rome was not a chosen one, but simply a tradition passed down, and superstitiously kept by the majority of the Roman people. One minority was the aristocracy; they decided that a simple religious practice was not enough, and consulted Greek philosophers and the like about their lives. ...read more.

It was probably a combination of both, giving the Christians more power either way. When the Emperor Galerius died, he signed an edict, later signed by Constantine, which gave the Christians the official right to worship as Christians. The same edict also allowed everyone religious freedom. However, later in Constantine's life, he refused to tolerate the pagan way of life, looting temples and persecuting pagans. This demonstrates that in fact, religious tolerance was always the main problem in Rome. The changeover from pagan to Christian began because of the lack of a "personal" belief or faith, which the evolving human needs. However, whichever religion was the "official religion" of the Roman Empire, there was never a great deal of religious tolerance, which greatly affected both the change from paganism to Christianity, and the final Christian religion. Conclusion It took a long period of time for the official religion of the Roman Empire to adjust to Christianity from its previous mythological and pagan centre. From this, it is obvious that the religion of Rome was a strong one, with many foundations and strongholds for both the authorities and the citizens to cling to. In the case of the authorities, they probably clung to the myths and legends of the original religion simply for power. The cult of deifying the emperor was a great assistance to keeping the people of Rome under the emperor's power. If believing he would later become a god, the superstitious citizens would easily succumb to following all of the emperor's laws and rules, to ensure a wrathful god did not punish them many years later. On the other hand, the citizens may have continued in their worship for two reasons. One, as mentioned above, to ensure a safe life from the wrath of the gods, and a healthy after life as well. Secondly, because they wished to follow the laws of state, which dictated that they should worship these gods. The majority of citizens would have worshipped simply to ensure their own survival in an empire that required its laws to be followed. ...read more.