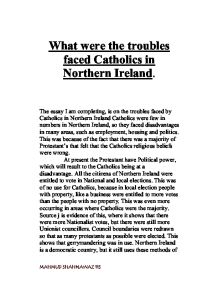 What were the troubles faced Catholics in Northern Ireland.

Many types of disadvantages were faced by Catholic , political was just one of them. The other type was economic disadvantage. In Northern Ireland, council houseing was distributed on unfair basis. It was proven that Protestants were given better houses in better areas. The areas that Catholics were poulated, were pretty run down areas. Source H proves this. Source H is a picture showing a Catholic family standing beside their bath. This bath is an outdoor bath, which means the houses Catholics were given were old damp victorian times houses. These types of houses are very unhygenic and illness and desieses will most certently be an issui. The newer houses tended to be housed by Protestant. ...read more.

In Northern Ireland there were limits to civil liberties. Special powers Act of 1922 permitted indefinite internment, arrest on suspicion, search without warrant and replacement of trail by jury with special courts. Though these laws apply to both Catholics and Protestants equally, Catholics suffered this more often. The police force, the RUC, made up of almost entirely of protestants and the majority of judges and magistrates in Northern Ireland were also Protestant. So these obviously were not being treated fairly. The RUC called the B specials for help. They were known for their extreme violence against Catholics. All this shows that Catholics suffer a great deal of discrimination by Protestants, in many areas such as education, employment, housing and law. There are some Catholic people that have no trouble with any of them things. END ?? ?? ?? ?? MAHMUD SHAHNAWAZ 11S ...read more.