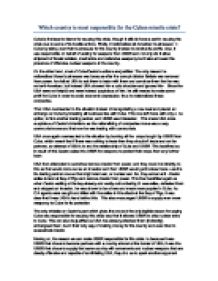 Which country is most responsible for the Cuban missile crisis?

Which country is most responsible for the Cuban missile crisis? Cuba is the least to blame for causing this crisis, though it still did have a part in causing the crisis due to some of its hostile actions. Firstly, it nationalized all American businesses in Cuba by taking over their businesses for the country instead to receive its profits. Also, it was responsible on behalf of asking for weapons from USSR and not only did it allow shipment of Soviet soldiers, mechanics and defensive weaponry but it also allowed the presence of offensive nuclear weapons in the country. On the other hand, most of Cuba/Castro's actions are justified. The only reason he nationalized those businesses was because after the corrupt dictator Batista was removed from power, he visited USA to ask them to trade with them and convince them that he was not anti-American, but instead USA showed him a cold shoulder and ignored him. Since the USA were not helpful and were instead suspicious of him, he still needed to make some profit for Cuba in order to avoid economic depression, thus he nationalized these companies. ...read more.

This also encouraged USSR to supply even more weaponry to Cuba for its protection. The only mistake on Castro's part which gives the one and the only legible reason for saying Cuba was responsible for causing this crisis was that it allowed USSR to ship nuclear arms to Cuba. This can also be justified as USA has already attacked them (indirectly), embargoed them, burnt their only way of making money for the country and even tried to assassinate Castro. Moving on, the reason we can make USSR responsible for this crisis is because it was USSR that chose to become partners with a country almost at the border of USA, it was the USSR that chose to supply that same country with armaments and nuclear weapons that are clearly offensive and capable of annihilating USA, they chose to spark another argument with the USA after already being involved in numerous arguments that had also brought them closer to war, such as the Berlin blockade, the Korean war and the Berlin wall. ...read more.

It can be argued that the Bay of Pigs attack and the mock invasions were performed because USA was trying to protect itself from danger as it had found out that Cuba was in possession of nuclear missiles, but this can be countered by going back to the fact that they already have missiles in Turkey so why should they be scared, USSR should be scared as USA had the first strike capability of annihilating the USSR and its nuclear weapons before they could attack, USSR placing nuclear weapons in Cuba only made the suicidal game even. In conclusion, we cannot blame Cuba mostly for the crisis as clearly we can see that it was just stuck between two superpowers, we cannot blame USSR as it had done nothing that harmed anyone and it only did something reaction of USA. Finally, we can certainly say that USA is most responsible for the Cuban missile crisis as its actions and overreactions were the reasons of most of the other two countries' actions. Also, we can clearly see from the above essay that USA has involved itself throughout events as the events did not go for the benefit of USA. ...read more.