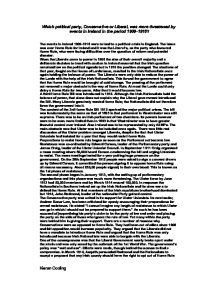 Which political party, Conservative or Liberal, was more threatened by events in Ireland in the period 1909-1916?

Which political party, Conservative or Liberal, was more threatened by events in Ireland in the period 1909-1916? The events in Ireland 1909-1916 were to lead to a political crisis in England. The issue was over Home Rule for Ireland and it was the Liberal's, as the party who favoured Home Rule, who were facing difficulties over the question of reform and potential disaster. When the Liberals came to power in 1906 the size of their overall majority and a deliberate decision to tread with caution in Ireland ensured that the Irish question remained low on the political agenda but in 1910 the position changed. The elections of that year, fought on the House of Lords issue, resulted in the Irish Nationalists once again holding the balance of power. The Liberals were only able to reduce the power of the Lords with the help of the Irish Nationalists. This forced the government to agree that the Home Rule would be brought of cold storage. The passing of the parliament act removed a major obstacle in the way of Home Rule. At most the Lords could only delay a Home Rule for two years. ...read more.

They argued that the Liberals did not have a mandate to introduce Home Rule and argued that the Home Rule was only introduced because Irish Nationalists were able to bargain with the Liberals. One of the consequences was that the Liberal Government nearly broke apart under the strain and was only saved by the outbreak of the 1st World War. The government's policy was "wait and see". Efforts were made, though behind the scenes to find a compromise. In March 1914, Asquith persuaded Redmond and the Nationalists to accept a proposal that any Irish county should have the right to opt out of Home Rule for a period of six years. The compromise was rejected by Carson and the Unionists who said "we do not want a sentence of death with a stay of execution for six years." On a visit to London, General Sir Arthur Paget, commanding officer in Ireland, asked what he was to do if his officers lived in Ulster or were sympathetic to the Unionist cause. Paget returned to Ireland to tell those who lived in Ulster they would either obey or face dismal. As a result of this 58 officers at Curragh stated they would prefer dismissal. ...read more.

Finally a treaty was made with Sinn Fein in 1921 by which only the six countries of Northern Ireland remained part of the U.K, with a parliament for local affairs. Under the treaty, the 26 southern counties would become the Irish Free State as a dominion within the British Commonwealth of Nations. It was the Liberals party reliance on the support of the Irish Nationalist MP's, which to a great extent led them to introduce a bill for Irish Home Rule. It is clear from the evidence shown that the Liberal party had the most to lose and were therefore threatened most by the Ireland Home Rule issue. They boldly tried to find a compromise to satisfy everyone but were unsuccessful. The Liberal Government came under severe pressure and nearly split on several occasions due to the enormous pressure from the Ulster Unionists and Irish Nationalists. Conservatives on the other hand were barely threatened. Whatever the outcome of the Home rule issue, the blame would lie with the Liberal Administration so Conservatives were content to sit back and let events take their course. The Conservatives tried to exploit the situation by opposing Home Rule and so gain more popularity and support but there is no evidence to show that the strategy succeeded. ?? ?? ?? ?? Kieran Cooling ...read more.