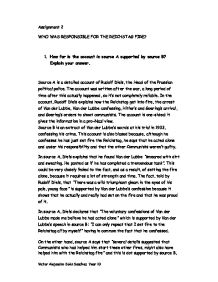 Who was responsible for the Reichstag fire?

Assignment 2 WHO WAS RESPONSIBLE FOR THE REICHSTAG FIRE? 1. How far is the account in source A supported by source B? Explain your answer. Source A is a detailed account of Rudolf Diels, the Head of the Prussian political police. The account was written after the war, a long period of time after this actually happened, so it's not completely reliable. In the account, Rudolf Diels explains how the Reichstag get into fire, the arrest of Van der Lubbe, Van der Lubbe confessing, Hitler's and Goering's arrival, and Goering's orders to shoot communists. The account is one-sided; it gives the information in a pro-Nazi view. Source B is an extract of Van der Lubbe's words at his trial in 1933, confessing his crime. This account is also biased because, although he confesses he has just set fire the Reichstag, he says that he acted alone and under his responsibility and that the other Communists weren't guilty. In source A, Diels explains that he found Van der Lubbe "smeared with dirt and sweating. He panted as if he has completed a tremendous task". This could be very closely linked to the fact, and as a result, of setting the fire alone, because it requires a lot of strength and time. The fact, told by Rudolf Diels, that "There was a wild triumphant gleam in the eyes of his pale, young face" is supported by Van der Lubbe's confession because it shows that he actually and really had set on the fire and that he was proud of it. In source A, Diels declares that "The voluntary confessions of Van der Lubbe made me believe he had acted alone" which is supported by Van der Lubbe's speech in source B: "I can only repeat that I set fire to the Reichstag all by myself" having in common the fact that he confessed. On the other hand, source A says that "several details suggested that Communists who had helped him start these other fires, might ...read more.

On the other hand, Source E and G prove, in some way, that Goering could have been telling lies at his trial in Nuremberg in 1946. Goering, in the party, could have been drunk and because of so, he could have talked more than he should and auto incriminates himself. Goering, could have been telling lies because, he wanted to defend himself. He is in trial and he would not want even more punishment, so he wouldn't have wanted to admit that he was the one who set fire to the Reichstag. In conclusion, the evidence shows that the sources cannot be used to evaluate if Goering was telling lies as they have all of them one-sided views: General Halder, in source E, wouldn't have wanted to be blamed for another thing, as Hermann Goering in source F, so they are to blame to each other and to help themselves from being blamed. Source G is an unreliable source, as it's published after his death and by the Communists, and surely it was published to help them gain support after they were blamed by the Nazis for the Reichstag fire. 6. Do these three sources make it more or less likely that the Nazis planned the Fire? Explain your answer. Sources H and I are extract from a history book published in 1974, so this source can be considered as a secondary source: it may not contain factual information. Source J is a photograph of what it was left of the German parliament, the morning after the fire. Source H supports the idea that the Nazis were to be blamed and that they had everything planned: "In fact, the Nazis had hoped to destroy the Communists after the election, when they would be in a stronger position to deal with them". This suggests that the Nazis had planned the arrest of the Communists before the fire, which means that they knew that the Reichstag was going to burn down fire so, they had all planned. ...read more.

The sources blaming the Nazi party or defending the Communists are also unreliable. Source B, Van der Lubbe's confession, defends the idea that he was alone and that he didn't received help from the Communists but, he was a Communist and he could have had cover them up. Source C is also an anti-Nazi cartoon but it's unreliable as it's British and may have not real facts, as it's a secondary source. Source E, which blames Goering for the fire, is not reliable because General Halder could have been trying to put the blame of the fire on someone that was not him. Source G, the supposed confession of Karl Ernst, is also an unreliable source because it was published after his death and by the Communists. There is also so much disagreement over the Reichstag fire because, as Van der Lubbe was the only one who was found, and he confessed to have acted alone, it is said that it was impossible for one man alone to set fire to the whole Reichstag. Source I, an extract from a history book published in 1974, supports this idea as the photograph in source J which shows how devastated the building was the morning after the fire. The damage shown in the photograph supports the idea that it was impossible for only one man to the fire. In conclusion, the evidence shows that it is impossible to determine who should have to be blamed for the fire because of the different versions there are and because each one contain one-sided views of the event and are totally biased. There are a little amount of facts and sources which allow, as they are not biased, to evaluate better the circumstances of the Reichstag fire. Note: I would be grateful if you could send me the mark I would get for this assignment. Thank you. ?? ?? ?? ?? Victor Alejandro Solis Sanchez Year 10 ...read more.