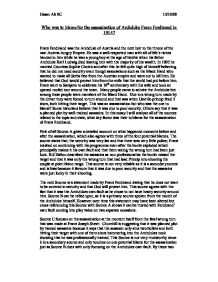 Who was to blame for the assassination of Archduke Franz Ferdinand in 1914?

Who was to blame for the assassination of Archduke Franz Ferdinand in 1914? Franz Ferdinand was the Archduke of Austria and the next heir to the throne of the vast Austria-hungry Empire. He was a well-respected man with all of life's riches handed to him while he was a young boy at the age of twelve when his father Archduke Karl Ludwig died leaving him with the majority of his wealth. In 1895 he married Countess Sophie Chotek and after this he felt quite high of himself believing that he did not need security even though associations such as the Black Hand who wanted to make all Serbs free from the Austrian empire and were out to kill him. He believed that God would protect him from the evils that the world had put before him. Franz went to Sarajevo to celebrate his 19th anniversary with his wife and took an opened roofed tour around the town. Many people came to admire the Archduke but among these people were members of the Black Hand. Due to a wrong turn made by the driver they were forced to turn around and that was when Gavrilo princip fired 2 shots, both hitting their target. ...read more.

Source C focuses on the assassination at the moment itself from the fatal wrong turn that was made at Franz Joseph Street. Churchill is suggesting that it was planned plot by trained assassins because it says that the assassin only shot two bullets and both hitting their target with one of them shots hammering into the Archdukes neck showing that he was professionally trained. This Source is not very trustworthy since it is a secondary source and only touches on one potential blame for the assassination just as Source B does with only focusing on the Archdukes own fault. By these two sources alone it is obvious that there was more than one cause for the assassination that at first meets the eye. Both Sources E and H show a picture of Ferdinand and his wife leaving the town hall unprotected with no bodyguards or police in sight. This source can be depended on because they are photographs of the couple from the time and cannot be altered unlike text. The photographs agree with the fact that Ferdinand' assassination was due to the fact of poor security since there are no police or soldiers in the picture when they were leaving the town hall. ...read more.

This Source supports the fact that it was well-planned plot by assassins as it refers to the fact that the streets were lined in them and nothing was left to assumption. In conclusion the assassination of Franz Ferdinand had many key factors that could take the blame but had Ferdinand not been so arrogant after the bomb had exploded to carry on his programme; been much more wary of his security and had heeded the advice to others to not go ahead with his programme, he would have had more of a chance to still be alive. However there were other key factors that Ferdinand could not control such as the shear luck of taking a wrong turn and the planned plot by the assassins for one of the many members of the Black hand in the crowd to shoot at point blanc range. I personally think that all four potential blames each had a key part equally in the assassination of Franz Ferdinand and had not one of these actions had happened maybe he would have not been assassinated. This debate is finely balanced with all four blames having a potential motive to carry the blame of the assassination of Franz Ferdinand. Hasan Ali 9C 15/10/08 ...read more.

The student has a clear understanding of what is expected of them and answers the question very well. The answer is clearly laid out and is fluent and logical. However, I would suggest a different approach to the one the ...

The student has a clear understanding of what is expected of them and answers the question very well. The answer is clearly laid out and is fluent and logical. However, I would suggest a different approach to the one the student has taken because then the conclusion follows through a bit more naturally and will come by no surprise. I suggest that the student analyse the sources according to the question and then sum out the findings and their opinion in the last sentence of that paragraph or section. In this way, the argument is more clearly laid out. I would say the introduction, whilst great for 'setting the scene', did labour the question title a bit too much. Obvious in the title is the point of debating the causes of the assassination and so it is almost wasting precious words in a word count and/or time to labour this point.

The student has used NOP (nature, origin and purpose) very well, however they should be careful of saying that sources are "biased". All sources are biased and so the reliability of the source is not so hindered by this. It is more to do with the balanced account of the source (reflected by the bias of the writer or even photographer). Their conclusion was not very judgemental - albeit that I was always taught that I could not 'sit on the fence'. In this light, basically even if you don't have a very strong opinion on what caused the assassination, you have to choose what you want to blame it on before you write the essay. This said, I don't think this majorly affected the grade hat the student gets, probably more so the mark. The student supports the points well and clearly understands the sources and is able to engage in debate with them which is excellent.

The spelling and grammar are fine, I would say there is a lack of punctuation (namely, commas). Splitting up sentences helps the fluency of the text but this said, the fluency of this piece of work was fine. One mistake that I should point out is students should always refer to the Archduke as 'Ferdinand' and not 'Franz' as the surname is always used in essays unless the person mentioned is personally known to the writer of the essay. The student follows a typical layout of the work, but as suggested above, I think they could try a different approach. The appropriate terms have been used in this piece of work but I would suggest staying away from using "I" in the essay.