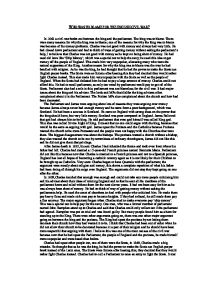 WHO WAS TO BLAME FOR THE ENGLISH CIVIL WAR?

WHO WAS TO BLAME FOR THE ENGLISH CIVIL WAR? In 1642 a civil war broke out between the king and the parliament. The king was to blame. There were many reasons for why the king was to blame; one of the reasons for why the king was to blame was because of his money problems. Charles was not good with money and always had very little. He had closed down parliament and had to think of ways of getting money without asking the parliament's help, I to believe that Charles was not good with money as he kept on being short of money. He had used old laws like 'Ship Money', which was a special tax to help the navy; he used this idea to get money off the people of England. This made him very unpopular, alienating many who were the natural supporters of the King. Another reason for why the king was to blame was the way he had handled with religion. As he was the king, he had thought that he had the power to make the Scots use English prayer books. The Scots were so furious after hearing this they had decided they would rather fight Charles instead. This also made him very unpopular with the Scots as well as the people of England. ...read more.

The major argument began when Charles tried to make everyone pay 'ship money'. This was a special tax to help pay for the navy. One man, who was a former member of parliament named John Hampden stood up to Charles and said that Charles could only collect tax if the parliament had agreed. Hampden was put on trial and was found guilty. But many people found him as a hero for standing up to the King. There were other arguments going on, there was one other major argument going on between the king and the puritans. The King had upset the puritans by not letting them decorate their church how they had wanted it to be. I think that Charles had been out of order when he did not allow their church to be decorated because it is part of their religion and he should have been more respectful that arguing with them. I believe this was one of the main causes of the civil war because now that he had upset the Parliament, the people of England and the puritans, he made himself more unpopular and more hated than before. Charles had upset other people too, one of them were the Scots, in 1640, Charles made a big mistake. He thought that as he was the king, he had the power to make the Scots use English prayer book instead of the Latin ones. ...read more.

The rebellion was between the Catholics and the Protestants. It was shocking when the people of England had heard about the killings in Ireland. The Irish rebels claimed that Charles approved of their rebellion, although this was not true. Even people who did not think Charles was involved in the Irish rebellion wondered if he could be trusted with an army to put it down as he might use to shut down Parliament first. This made Charles very angry because he should have been given an army to protect his people. On 4th January 1642 Charles tried to arrest the five members- his leading opponents in parliament. They had already left the house, but his actions came as a great shock. How could Parliament discuss the country's problems if the king might force himself in with armed men and try to arrest people who criticised him? I believe parliament found this as a treat and did not want to trust Charles with anything ever again. Crowds in London demonstrated in defend of parliament. Charles thought it would be safer to leave the city. Six days later, Charles left London and headed north to raise an army. In February the Queen went abroad to p**n the crown jewels to pay for it. The two sides prepared for civil war. On 22nd August Charles raised his standard, the traditional declaration of war. ...read more.