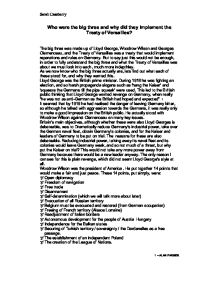 Who were the big three and why did they implement the Treaty of Versailles?

Who were the big three and why did they implement the Treaty of Versailles? The big three was made up of Lloyd George, Woodrow Wilson and Georges Clemenceau, and the Treaty of Versailles was a treaty that would implement reparations and rules on Germany. But to say just this would not be enough, in order to fully understand the big three and what the Treaty of Versailles was about we must look into each, much more indepthley. As we now know who the big three actually are, lets find out what each of these stood for, and why they wanted this. Lloyd George was the British prime minister. During 1918 he was fighting an election, and so harsh propaganda slogans such as 'hang the Kaiser' and 'squeeze the Germans till the pips squeak' were used. This led to the British public thinking that Lloyd George wanted revenge on Germany, when really "he was not as anti-German as the British had hoped and expected" 1 It seemed that by 1919 he had realised the danger of leaving Germany bitter, so although he talked with aggression towards the Germans, it was really only to make a good impression on the British public. He actually stood with Woodrow Wilson against Clemenceau on many key issues. ...read more.

Clemenceau's view point very much dominated the peace treaties, and he represented most of France when he said that Germany should be made to pay for the war, and dismantled so they would never pose as a threat to France again. France had a bad history with Germany, and so this led to Clemenceau needing to make sure that France's borders with Germany would be safe. The main Objectives of France, apart from revenge, was the return of Alsace and Lorraine, which they had lost to Germany in 1871, and reparations to pay for the war fought on French soil. Now that we know who the main people involved where, and what they wanted, we can look at the Treaty of Versailles. This was a treaty to deal with 3 main issues: Territorial terms, Disarmament and Reparations and war guilt. "Negotiations about Germany's frontiers were highly contentious" 1 The French demanded that Germanys western frontier be fixed on the River Rhine. The area on the left bank would go to France. Lloyd George and Woodrow Wilson both objected to this, believing it would become a cause of German resentment. The settlement of Germany's eastern border was even more meticulous. The 14 points had promised to create an independent Poland which would have some access to the sea. However there was no clear cut division between areas of German and polish population. ...read more.

Germany also fell heavily into depression which soon led to hyper-inflation, and the loss of many normal working class people's life savings. There are many criticisms of the peace settlement and of the reparations, and many of them are true. To name but a few, Germany was not present, self-determination was not applied and the Italian frontiers were not fixed. The treaty was compiled in haste, and did not equally take into account all of the allies ideas. Another criticism could be that the USSR was not involved, which would have put more strength behind the settlements. The treaty also created rivalries in the Balkans and disturbed the balance of power in Europe. The main criticisms of the reparations were that Germany could not afford them, and they were not shared equally between the allies. Overall, it seems that the treaty of Versailles was a very shabby affair indeed. Power was not split equally between the allies, leading to unfair rules being imposed on Germany, and no one took into account that this would, inevitably, lead to resentment in the German people. It could be said, that the allies actually caused the 2nd world war, by putting hatred into the hearts of the German people, who ere more than willing to listen when someone like Hitler came along and told them that Germany would be great again. Sarah Caseberry ...read more.