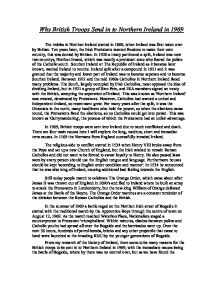 Why British Troops Send in to Northern Ireland in 1969.

Why British Troops Send in to Northern Ireland in 1969 The trobles in Northen Ireland started in 1800, when Ireland was first taken over by Britian. Ten years later, the Irish Protistants wanted freedom to make their own country, this was denied by Britian. In 1920 a treaty partitoned a split, Ireland was now two countrys, Northen Ireand, which was mostly a protistant state who feared the police of the Catholic south. Southen Ireland or The Republic of Ireland as it became later known, wanted Ireland to reunite. Ireland split after a compound in 1921 and it was granted that the majority and lower part of Ireland was to become seperate and to become Southen Ireland. ...read more.

In 1969, British troops were sent into Ireland due to much conflicked and death. There are four main causes here I will explore the long, medium, short and immediat term causes. In 1169 the Normans from England sucessfully invaded Ireland. The religious side to conflict started in 1534 when Henry VIII broke away from the Pope and set up a new Church of England, but the Irish wished to remain Roman Catholics and did not want to be forced to swear loyalty to Henry. He also passed laws were by every person should use the English tongue and language. Furthermore houses should be kept 'according to English order condition and manner'. ...read more.

Over the next 36 hours, hundreds of petrol bombs, bricks and any other projectile that came to hand were launched at the invading RUC by the younger generations of Bogside. From my research of the history of Ireland, there seem to be many reasons for the British troops to be sent in to Northern Ireland in 1969, with the immediate causes being the battle of Bogside, where by there was no control over, but as we have found the trouble had started well before this time, with the plantations of Protestants, The Battle of the Boyne and the start of this conflict since 12th century with Henry II invading Ireland. The hatred between the two neighbouring countries was built up over the centuries into the conflict of the present day. ...read more.