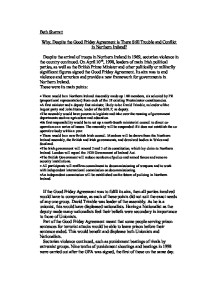 Why, Despite the Good Friday Agreement is There Still Trouble and Conflict in Northern Ireland?

Beth Sharratt Why, Despite the Good Friday Agreement is There Still Trouble and Conflict in Northern Ireland? Despite the arrival of troops in Northern Ireland in 1969, sectarian violence in the country continued. On April 10th, 1998, leaders of main Irish political parties, as well as the British Prime Minister and other politically or militarily significant figures signed the Good Friday Agreement. Its aim was to end violence and terrorism and provide a new framework for governments in Northern Ireland. These were its main points: * There would be a Northern Ireland Assembly made up 108 members, six selected by PR (proportional representation) from each of the 18 existing Westminster constituencies. *A first minister and a deputy first minister, likely to be David Trimble, as leader of the largest party and John Hume, leader of the SDLP, as deputy. *The assembly would have powers to legislate and take over the running of government departments such as agriculture and education. *Its first responsibility would be to set up a north-South ministerial council to direct co-operation on a series of issues. ...read more.

Part of the Good Friday Agreement meant that some people serving prison sentences for terrorist attacks would be able to leave prison before their sentence ended. This would benefit and displease both Unionists and Nationalists. Sectarian violence continued, such as punishment beatings of rivals by extremist groups. Nine tenths of punishment shootings and beatings in 1998 were carried out after the GFA was signed, the first of these on the same day. This proved that some were prepared to go to any lengths to prevent the GFA from achieving its aims. The orange marches still continued to pass through an area known as the 'diamond', a notoriously Catholic part of Derry, causing more conflict. The signing of the GFA caused the forming of splinter groups. These consisted of ex-members of groups that had signed the GFA. They had 'splintered' from their group as their more extreme views meant they did not believe in signing the GFA. These groups were known to carry out violent attacks. One of these groups was known as 'The Real IRA'. ...read more.

Esther Holmes was taking her daughter to school during the violence. "It was absolutely terrifying. They were shouting 'dirty tramps', 'your kids are animals', 'Fenian scum', 'you Fenian bastards'. And all we were trying to do was get our kids to school." This shows the extent of the level of vitriol in the area. The violence became so bad the school had to shut for a number of days, and was only able to reopen when measures had been taken to increase the safety of the school children and their parents. Part of the GFA stated that paramilitary groups were to decommission their weapons. Despite this, none has taken place., hindering the development of peace. These troubles could only be explained by the huge difference in demands from different groups. The GFA aimed to satisfy most of these groups but has not been able to achieve its aims due to 'the legacy of mistrust' that has existed due to deep rooted reasons that have existed for centuries between Nationalists and Unionists in the province. ...read more.