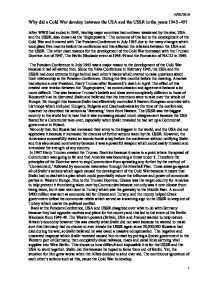 Why did a Cold War develop between the USA and the USSR in the years 1945-49?

Why did a Cold War develop between the USA and the USSR in the years 1945-49? After WWII had ended in 1945, two big major countries had not been weakened by the war, USA and the USSR, also known as the 'Superpowers.' The outcome of this led to the development of the Cold War and it started with The Potsdam Conference in July 1945 due to the many changes which took place five months before the conference and this affected the relations between the USA and the USSR. The other main reasons for the development of the Cold War increased with the Truman Doctrine Act of 1947, The Berlin Blockade event at 1948-49 and the Formation of NATO in 1949. The Potsdam Conference in July 1945 was a major reason to the development of the Cold War because it had all started then. Since the Yalta Conference in February 1945, the USA and the USSR had done extreme things behind each other's backs which started to raise questions about their relationship at the Potsdam Conference. ...read more.

Therefore the principles of the Doctrine were to stop Communism from spreading any further by the method of 'Containment,' followed by economic restoration through the Marshall Plan. These ideas go against all of Stalin's actions which again caused the development of the Cold War because it meant that Stalin had to deal with a plan which could potentially reduce the influence and power of communist parties in Western Europe. Due to the Truman Doctrine, Greece was the target country for America to help prevent it from being taken over by Communists because not only was it next closest from being taken, but it was next door to Turkey which was the gateway to the Middle East. A sum of $400 million was sent as economic aid for Greece and Turkey, and the money helped Greek government defeat the communist rebels which served as a warning sign to the USSR to keep out of Turkey which marks the political conflict. ...read more.

This fear was particularly felt during the 'Berlin Airlift' when the Allies were sending aid over to the soviet-controlled side of Berlin, because nobody knew how the USSR would react. Also, to prove the difficult relationship between the Superpowers, Stalin described NATO as an 'aggressive alliance' aimed at the Soviet Union, which demonstrates his disapproving tone. By 1949, we can see definite changes when we compare the relationship between the USA and the USSR since the Potsdam Conference. Their ignorance for one another has caused such events such as the Berlin Blockade and the Truman Doctrine to occur which develop this Cold War, however it was tension and uncertainty which built up the Cold War, but it never turned into a physical war. The fact that the USA believes only in the system of Capitalism and the USSR in Communism, is the root to the development of the Cold War, because this proves how they cannot agree or efficiently work together due to their ideologies, and because of this it separated them and they ended up as enemies instead. 14/02/2010 1 ...read more.