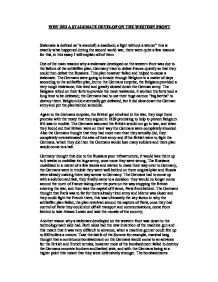 WHY DID A STALEMATE DEVELOP ON THE WESTERN FRONT

WHY DID A STALEMATE DEVELOP ON THE WESTERN FRONT Stalemate is defined as "a standoff; a deadlock; a fight without a winner" this is exactly what happened during the second world war, there were quite a few reasons for this, in this essay I will explain all of them One of the main reasons why a stalemate developed on the western front was due to the failure of the schlieffen plan; Germany tried to defeat France quickly so that they could then defeat the Russians. This plan however failed and helped to cause a stalemate. The Germans were going to invade through Belgium in a matter of days according to the schlieffen plan, but to the Germans surprise, the Belgians provided a very tough resistance, this tired and greatly slowed down the German army. The Belgians relied on their forts to provide the most resistance, it worked the forts took a long time to be defeated; the Germans had to use their huge cannon "big bertha" to destroy them. ...read more.

The Germans thought that Paris was to far for there already tired army and Marne was closer and they could fight the French there, this was ultimately the key factor in why the schlieffen plan failed, the plan revolved around the capture of Paris, once they had control of Paris they could shut off all transport and communications, come from behind to take Alsace Lorain and take the morale of the country. Another reason why a stalemate developed on the western front was down to the technology each side had. Both sides had the new invention of the machine gun and this meant that it was very difficult to advance, when a machine gunner could fire up to 600 bullets a minute. Take the battle of the Somme for example, marshal haig thought that a continuous bombardment on the Germans would come to an advance for the British and French armies, however most of the bombardment failed to destroy the Germans concrete bunkers and barbed wire, and with the Germans being at a higher point this meant that they were defensively stronger. ...read more.

only open flank remaining which was open for manoeuvre, each side was constantly striving to outmanoeuvre the other .Once the trench lines had reached the coast, the Allies who were defending against the German attacks, their focus switched to the Swiss border, which was 400 miles in length. Before this happened the channel was deemed to be a key strategic priority and at the end both sides had possession of different channel ports. Deemed somewhat of a draw at the end of November, trench warfare set in for the next four years with the occasional allies trying to puncture the enemy lines. So I conclude that there were a fair amount of reasons that contributed to the stalemate developing on the western front but I feel as if the failure of the schlieffen plan contributed the most as it started it all off, if the schlieffen plan had not gone ahead then Britain would not got involved and there wouldn't be devastating and somewhat pointless battles like the Somme. ...read more.