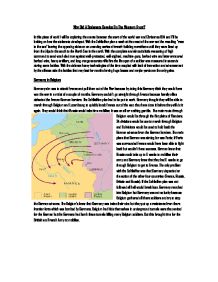 Why Did A Stalemate Develop On The Western Front?

Why Did A Stalemate Develop On The Western Front? In this piece of work I will be exploring the events between the start of the world war and Christmas 1914 and I'll be looking on how the stalemate developed. With the Schlieffen plan a wash at the onset of the war and the resulting "race to the sea" leaving the opposing sides on an unending series of trench-building marathons until they were lined up from the Alps in the south to the North Sea in the north. With the complete and almost idiotic reasoning of high command to send wool-clad men against well-protected, well-sighted, machine-guns, barbed wire and later armoured barbed-wire, heavy artillery, and long-range accurate rifle fire the life span of a soldier was measured in seconds during some battles. With the defence heavy technologies of the time coupled with lack of innovation and advancement by the offense side the battles that may last for months having huge losses and maybe yards are the only gains. Germany in Belgium Germany aim was to attack France and pull them out of the War because by doing this Germany think they would have won the war in a midst of a couple of months. ...read more.

The best known Plan (Schlieffen) had failed and Germany was caught up in a two-front war. The German general realised that they couldn't break through the enemy lines; Moltke was replaced by commander Falkenhayn who decided the best way to get to your enemy lines was to outflank them his enemy lines. The German were digging in to guard themselves from the advancing allies. The charge went on 12th October. This became the race to the sea. The Germans charged west towards to the sea. Each army tried to outflank the other to achieve the benefit, the British and French moved troops to block the Germans whenever it seems like they are about to attempted to break through. The First Battle of Ypres The battle of Ypres was in Belgium, this was one of the key battles in the race to the sea. Still trying to break through each others trench line, from the 12th October to 11th November 1914 the BEF lost around 50,000 men and the Germans lost around 100,000; but the British held the important ground-they kept the control of the English Channel Ports which meant they could be supplied with equipments and reinforcements. ...read more.

Rolls Royce also joined in the development of these tanks, by building their own armoured car! It could travel up to 88 kilometres and had 8mm machine guns. Planes were the new types of weapons use in advanced technological warfare. They had everything from mini scout planes to huge blimp like bombers called Zeppelins. Air warfare was not seen as important as any other type so it did not have its own category. Conclusion I think Germany invading Belgium is the most responsible for the stalemate, because if German hadn't invaded Belgium they wouldn't have gone through a series of Battles. German trust a plan that was made quite sometime ago which relied of the actions on the other countries around them which may have been different like it was. But if Belgium just let Germany thorough there country then Germany could have captured Paris quickly enough and kicked them out of the war and the war may have been finished by Christmas. But one different move may have changed the whole history of this from a 4 year war to a 5 months war. I think because of the actions of both Germany and Belgium the war was at stalemate. Belgium was a neutralised country they weren't on any side so there wouldn't have been a problem with German forces marching through their country? ...read more.