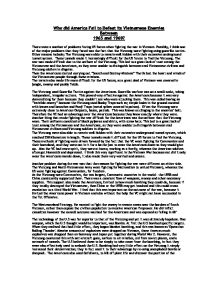 Why did America Fail to Defeat its Vietnamese Enemies Between 1965 and 1969?

Why did America Fail to Defeat its Vietnamese Enemies Between 1965 and 1969? There were a number of problems facing US forces when fighting the war in Vietnam. Possibly, I think one of the major problems that they faced was the fact that the Vietcong were fighting using guerrilla tactics. Other reasons include; The Vietcong were able to remain well hidden with their extensive underground tunnel system. These tunnels made it increasingly difficult for the US forces to find the Vietcong. The war was made difficult due to the uniform of the Vietcong. This led to a great lack of trust among the Vietnamese and the Americans, as they were unable to distinguish between real Vietnamese civilians and Vietcong soldiers in disguise. Then the Americans started carrying out "Search and Destroy Missions" The Us lost the heart and minds of the Vietnamese people through these missions. The terrain also made life more difficult for the US forces, as a great deal of Vietnam was covered in jungle, swamp and paddy fields. The Vietcong used Guerrilla Tactics against the Americans. Guerrilla warfare was on a small scale, taking independent, irregular actions. This proved very effective against the Americans because it was very demoralizing for them because they couldn't see who were attacking them. This was called having an "invisible enemy" because the Vietcong used Booby Traps such as; simple holes in the ground covered with leaves and branches and Punji Traps (metal spikes covered in poison). ...read more.

I feel that this was important on the outcome of the war, because it limited the Americans power in Vietnam and also without the help the VC might not have succeeded in the Tet Offensive. The Westmoreland Strategy. He wanted to fight the enemy in remote areas near the borders of South Vietnam, rather than expose the civilian population to massive American firepower. He did inflict casualties however the overall outcome was bad for the Americans and was exposed as failing in 68' The technology of the U.S was far superior to that of the Vietcong and yet it was ultimately hopeless. One weapon, which the U.S thought would be important, was Bombs. At first the U.S bombed specific targets. When they realised that had little effect, they began blanket bombing, and this was known as 'Operation Rolling Thunder'. Massive amounts of explosives were dropped on Vietnam, three times as much explosives was dropped than on Germany and Japan put together during World War 2. However, the Vietcong countered this with anti-aircraft guns, surface to air missiles, aid from soviet planes, and a network of tunnels. The U.S believed these to be simply to take cover from the bombing, in-fact they were also effectively used to ambush the U.S. Bombing had very little effect on the Vietcong it simply increased their determination; they in fact used it to their advantage by re-using unexploded bombs or shrapnel. ...read more.

Of course this would be expensive, but when the massive costs of Vietnam were paid, there was no money, so the reforms were halted and this angered the people of America. I think that the most important reasons for America losing the War, is a combination of the Media and the Guerrilla Tactics. I feel this because the Vietnamese tactics wore the Americans down, by keeping hidden from them. This made them unsure and angry because they never knew who the enemy were. Also because the Americans back home were seeing there were no successes they didn't get any public support. This made the troops feel depressed which led them to take drugs and also they kept questioning why they were actually there, so they didn't put maximum effort into the war. The Media made the situation worse as said above. Maybe if the media hadn't of been so harsh then the American Troops morale would have been higher and therefore they might have stayed in Vietnam instead of pulling out and therefore they might not have lost the war like they did. Daniel Ibbotson 11BR Most of the US soldiers were also caught out by booby traps set up by the Vietcong. These ranged from simple holes in the ground to metal spikes covered in poison, known as Punji Traps. Booby traps were thought to have accounted for 11 per cent of US deaths in Vietnam and 17 per cent of wounds. ...read more.