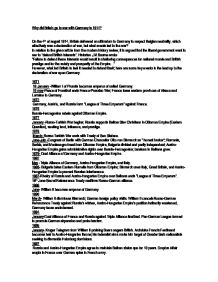 Why did Britain go to war with Germany in 1914

Why did Britain go to war with Germany in 1914? On the 4th of august 1914, Britain delivered an ultimatum to Germany to respect Belgian neutrality, which effectively was a declaration of war, but what events led to the war? In relation to the given article from the modern history review, it is argued that the liberal government went to war to "defend British interests". Historian J.M.Bourne wrote "Failure to defend these interests would result in shattering consequences for national morale and British prestige and for the safety and prosperity of the Empire..." However, what led Britain to feel it needed to defend itself; here are some key events in the lead up to the declaration of war upon Germany. 1871 18 January -William I of Prussia becomes emperor of united Germany. 10 may-Peace of Frankfurt ends Franco-Prussian War; France loses eastern provinces of Alsace and Lorraine to Germany. 1872 Germany, Austria, and Russia form "League of Three Emperors" against France. ...read more.