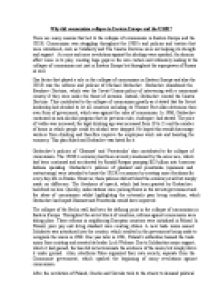 Why did communism collapse in Eastern Europe and the USSR?

Also, rebellious Poles organized their own society, separate from the Communist government, which sparked the beginning of many revolutions against communism. After the revolution of Poland, Czechs and Slovaks took to the streets to demand political reforms in Czechoslovakia. Leading the protests in Prague was Havel, the founder of the reform group Charter 77. The Communist Party of Czechoslovakia quietly and peacefully transferred the government rule to Havel. The Czechoslovakian revolution, which was later called the ?Velvet Revolution?, was a success and another country had fallen from the reign of communism in Eastern Europe. Another revolution In Romania was also taking place very soon after the velvet revolution. The Communist regime of hardliner Nicolae Ceausescu was overthrown by popular protest and was shot dead after getting a death sentence for killing citizens. Soon, the Communist parties of Bulgaria and Albania were also ended as communism was quickly spiraling out of control in the East. Another reason for the collapse of communism in the USSR was the war in Afghanistan. In 1979, The USSR invaded Afghanistan in an attempt to support the decaying communist government there. ...read more.

Thousands of Germans were escaping to the west through Hungary and the GDR was powerless to stop them. Honecker, the East German leader, collapsed under the pressure and. The border was due to be opened on the 10th, however a mistake in a press conference resulted in the border being opened on the evening of the 9th. As the guards stood confused whether to open the order or not, huge crowds gathered for the monumental event. Once the border was eventually opened, thousands of people crossed the border of which had previously marked the communist, capitalist divide. This was the moment that I believe collapsed communism not just in Eastern Europe but in Russia as well. There are many reasons for the collapse of communism in Eastern Europe and the USSR, however I believe that some are more important than others. I believe that the most important factor that led to the collapse of communism not just in the USSR but also Eastern Europe was Gorbachev. Gorbachev introduced taxes and policies, which never had an affect on the USSR?s poor economy and made people dislike him and turn away from the communist ideology. However I also feel that Gorbachev did the right thing in ending the cold war without violence and blood shed. Alex Skudder ...read more.