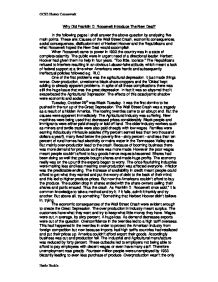 Why Did Franklin D. Roosevelt introduce The New Deal?

Why Did Franklin D. Roosevelt introduce The New Deal? In the following pages I shall answer the above question by analysing five main points. These are; Causes of the Wall Street Crash, economic consequences, social consequences, disillusionment of Herbert Hoover and the Republicans and what Roosevelt hoped the New Deal would accomplish. When Roosevelt came to power in 1933 the country was in a state of complete calamity. The public were in urgent need of a directional leader. Herbert Hoover had given them no help in four years. "Too little, too late." The Republicans refused to interfere resulting in an obvious Laissez-faire attitude, which meant a lack of federal support at a time when Americans were frantic and subsequently ineffectual policies followed e.g. RLC. One of the first problems was the agricultural depression. It just made things worse. Over-production, unwelcome black share croppers and the 'Okies' kept adding to already apparent problems. In spite of all these complications there was still the huge issue that was the great depression. In fact it was so abysmal that it exacerbated the Agricultural Depression. The effects of this cataclysmic shadow were economic and social. Tuesday, October 29th was Black Tuesday. It was the first domino to be pushed in the run up of the Great Depression. The Wall Street Crash was a tragedy as a result of a hidden America. ...read more.

This had happened in the twenties in order to protect the American industry from foreign competition but now because imports had high tariffs countries had retaliated and put their prices up. America couldn't afford export their goods. Accordingly business was cut and production fell. The Industrial and Agricultural manufacture was reduced by forty percent. These cutbacks led to employers not being able to afford to pay employees with decent wages or even have many staff. Therefore unemployment rose greatly. Fourteen million people were unemployed by 1933 blatantly leading to even less purchase of produce. Overproduction wasn't the only major consequence, the banking crisis also worsened. Between 1929 and 1933 the number of banks bankrupt went up by over four thousand. That's and average of over eighty three banks a month. Herbert Hoover was nowhere to be seen. His Laissez Faire attitude was clearly making America the victim. The Americans withdrew their savings for fear of even further loss. A prospect becoming very likely. Facing additional cost was something that they were beginning to do. There was then the social aftermath that America was left with. Towns had queues of people lining up for soup and bread, food was becoming a luxury. Immigrants looking for work lived in shanty towns also known as 'Hoovervilles'. The wealthy were affected less an could afford to throw away their scraps. ...read more.

"The only limit to our realisation of tomorrow will be our doubts of today." His enthusiasm was undeniable and won over the unaided and vulnerable people of America. His main aim was to regain the American's trust in the banks again. The economy was dire and to get it back the banks were the obvious first step. He next wanted to help save property and savings for the gloomy Americans. Their outlook so far was poor and Roosevelt wanted to be the light at the end of their tunnel. American industry and Agriculture seemed to have fallen forever. But Roosevelt's passion and genuine concern gave hope that sometime in the future industry would be alive again. Unemployment was high and the jobless were resorting to the inevitable bleak future of Hoover. Nevertheless Roosevelt swooped in and gave hope top them. His promise of never ending jobs rang in the unemployed ears like a favourite tune. A tune that hadn't been heard in many years. Finally he wanted to supply relief for the old, sick and unemployed. Their appalling circumstances were in need of a an overhaul. Roosevelt equipped them with courage in his policies and he seemed to be helping greatly. As the great man himself once said, "Men are not prisoners of fate, only prisoners of their own minds." That fire in his belly made Roosevelt the conqueror of desolation, the hero of the Great Depression. Or was his fervour a facade? As the1930s entailed the answer is apparent. GCSE History Coursework Hattie Huckle ...read more.