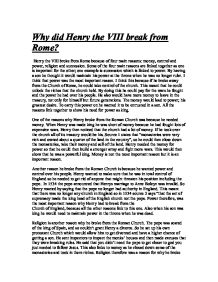 Why did Henry VIII break from the Roman church

Why did Henry the VIII break from Rome? Henry the VIII broke from Rome because of four main reasons: money, control and power, religion and succession. Some of the four main reasons are linked together as one is important for the other; one example is succession which is linked to power. By having a son he thought it would maintain his power at the throne when he was no longer ruler. I think that power was the most important reason. I think this because if he broke away from the Church of Rome, he could take control of the church. This meant that he could unlock the riches that the church held. By doing this he could pay for the wars he fought and the power he had over his people. He also would have more money to leave in the treasury, not only for himself but future generations. The money would lead to power; his greatest desire. ...read more.

Henry wanted to make sure that he was in total control of England so he needed to get rid of anyone that might threaten his position including the pope. In 1534 the pope announced that Henrys marriage to Anne Boleyn was invalid. So Henry reacted by saying that the pope no longer had authority in England. This meant that there was no longer any church in England so in 1534 source 2 says "that the act of supremacy made the king head of the English church not the pope. Power therefore, was the most important reason why Henry had to break from the Church of England, because all the other reasons link to this one. Also when his son was king he would need to maintain power in the throne when he was dead. Religion is another reason why he broke from the Roman Church. The pope was scared of the king of Spain, and so couldn't grant Henry a divorce. ...read more.

He asked for a divorce from the pope but the king of Spain threatened him that if he let the divorce go on then he would be angry. So the pope did not let the divorce on. But arrangements were made for Henry to get married. But in 1534 the pope announced that henrys marriage to Anne Boleyn as invalid. Henry reacted by saying the pope no longer had authority in England. Henry realised that if he took control of the church then he would be able to get married to Anne. This is not the most important reason. Henry wanted a son so that power remained in the Tudor family for future generations. Henry broke from Rome because of many reasons but these are the four main reasons, power, money, religion, and succession. They all link together, but all of the reasons link together for his need for power. I think that power is the most important because all the reasons are linked together for power and Henry took control of the Church mainly because he wanted to maintain power over his people and build a reputation of a rich and powerful king. ...read more.