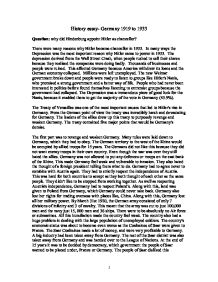 Why did Hindenburg appoint Hitler as chancellor?

History essay- Germany 1919 to 1933 Question: why did Hindenburg appoint Hitler as chancellor? There were many reasons why Hitler became chancellor in 1933. In many ways the Depression was the most important reason why Hitler came to power in 1933. The depression derived from the Wall Street Crash, when people rushed to sell their shares because they realised the companies were doing badly. Thousands of businesses and people were ruined. This affected Germany because America withdrew its loans and the German economy collapsed. Millions were left unemployed. The new Weimar government broke down and people were ready to listen to groups like Hitler's Nazis, who promised a strong government and a better way of life. People who had never been interested in politics before found themselves listening to extremist groups because the government had collapsed. The Depression was a tremendous piece of good luck for the Nazis, because it enabled them to get the majority of the vote in Germany (43.9%). The Treaty of Versailles was one of the most important causes that led to Hitler's rise in Germany. From the German point of view the treaty was incredibly harsh and devastating for Germany. The leaders of the allies drew up this treaty to purposely revenge and weaken Germany. The treaty contained five major points that would be Germany's demise. The first part was to revenge and weaken Germany. Many rules were laid down to Germany, which they had to obey. ...read more.

Hitler hated the Treaty of Versailles and he often referred to the people who signed it as "November criminals" because the war had ended in November. He stirred up the German people by reminding them of parts of the treaty that they would not like and he promised that if he was elected he would refuse to abide by many terms in the treaty, such as the reparations, military restrictions, and the land which was "stolen" away from Germany. He knew that people in Germany felt bad from the depression, and so the majority of the population blamed their problems on the treaty, this caused many to turn towards Hitler, because he had been against the treaty right from the start. After becoming the leader of the Nazi party, he set his sights on overall power of Germany. He had very strong views on Germany being the Master race and thought that Germany was far superior to any other country. Hitler wanted Germany to stand up and be strong once more. He planned to do this by having a Third Reich. He said that Germany needed to reach out to all the German people in whatever country. He wanted to join up with Poland, the Sudetenland and Austria. If these three countries wouldn't agree to join with Hitler and Germany, Hitler would almost certainly invade and conquer them anyway. Hitler knew that this would be breaking the treaty, but he didn't care. ...read more.

They just wanted a new government and leader who could help Germany from the great Depression. Many historians believe that it was just not Papen and Scheliser who were the ones who persuaded Hindenburg to choose Hitler as the next chancellor. It was due to the elite. The elite were the top one percent of people who practially owned Germany. They were the rich industrialists, generals. Basically they were the most richest and influential people in the country. They all had there own reason for wanting Hitler in power, the generals wanted a dictatorial figure, and the rich wanted someone who was against the communists. The most important reason why the elite, Hindenburg, Von Papen and Scleicher wanted Hitler in power was because they naively thought that Hitler would be able to be controlled and manipulated. Nonetheless no one reason can explain why Hitler gained power in Germany in 1933. Many of the reasons are inter-linked. The Depression led to high unemployment because factories had closed down, and farmers and many businessmen could not sell their goods. The Depression led to millions supporting parties that worked to end the Weimar republic. Many businessmen then looked to Hitler to defend them from the communists. The deal with Von Papen led to Hitler gaining office as chancellor and eventually becoming a dictator. Goebbels' intelligent propaganda then built on the anti-Communist and anti-Semitic views that already existed in Germany. This in turn further increased the popularity of the Nazis. What is clear that no one was solely to blame for putting Hitler in power. 1 ...read more.